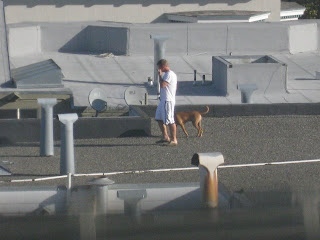 If you have ever wondered what a dog's life is like in the City with no yard to play in; wonder no more.
Instead of going out to play in the yard, they head on up to the roof for supervised "play" and bathroom time. 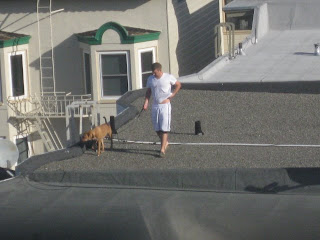 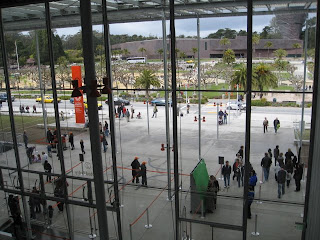 * Warning This Entry Contains Images And Written Content That May Be Too Much For The Squeamish*
Last weekend my parents came up to visit.  I always try and think of a few activities for us to do together while they are here in the City.  This trip I thought it would be great to visit the newly opened California Academy of Sciences in Golden Gate Park.  I have heard great things about the Academy from the amazing Rainforest exhibit to the Planetarium to even the food. 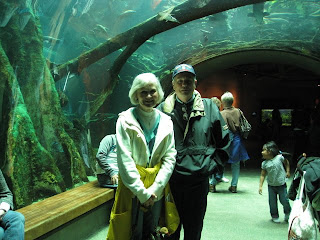 Since the Academy only recently opened, it often sells out and is very crowded.  Because of this I knew I needed to buy the tickets in advance.  Done and done.
Second, I also knew that once inside there would probably be long lines to get into each exhibit. Check!
The only thing I didn't know was that you needed separate "Time" passes for some of the exhibits.  The passes had to be picked up once inside the Academy.  Not done and not done.  No check!
As suggested on the Academy website, we arrived early in the morning.  As soon as we got in the door I grabbed the visitor map and declared we would immediately proceed to the Rainforest!
Poor choice.
There was a forty five minute line to get into the Rainforest dome. 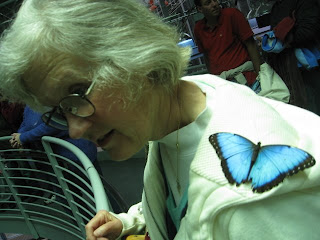 Once inside the Rainforest dome you walk along a circular path that starts at ground level and works its way up into the canopies of the trees.  As you walk along the path there are birds and butterflies flying about.  In the photo above, a beautiful blue butterfly landed on my mom's shoulder.
Guests are asked to gently brush the butterflies off if they land on you.  You are also warned numerous times that you CAN NOT take the butterflies with you when you leave.  See sign below. 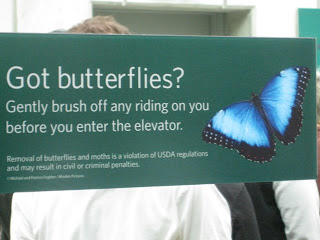 Now maybe I missed the whole concept that this was a "Science" museum.  But I was a little shocked when we were waiting in line to get into the Rainforest and right next to the line was a glass room "Research Lab" that had volunteers dissecting animals.
OK, fine; it's a science museum and you are going to dissect animals.  But do you have to then project up close images on giant flat screen TVs of the dirty deed?
Don't believe me?  Check it out below! 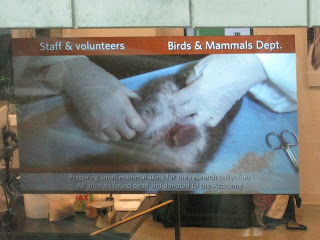 The funniest part about the whole thing was that the volunteers who were doing the dissecting weren't necessarily even looking at what they were doing.  It was like a regular ladies social hour.  They were all chatting away and laughing as their hands continued to rigorously separate the skin from the body.
Also, there was a sign that said all research animals were donated to the Academy.  Well, they kinda looked like the same squirrels and birds that were outside in Golden Gate Park.  I wanted to immediately go outside and say, "Run Squirrel Run!" 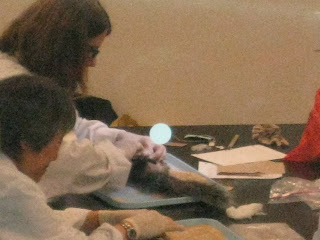 After the Rainforest we rode the elevator down into the Aquarium.  It is a pretty good aquarium and even has a tidepool area where you can handle some of the creatures.
We then went to the Cafe for lunch.  There is quite a variety of food to choose from and everything tasted good.
During lunch we had heard some other guests discussing what time their "Passes" were for the Planetarium.  Hmmmm.  We didn't have "Passes."  Maybe I shouldn't have rushed us so quickly to the Rainforest.
So after lunch we went in search of the elusive "Passes" only to discover that all the "Passes" had already been given out for the day.  That meant that we would not be able to see the Planetarium or the 3D Bug Movie.  I was a little upset about this, but not as upset as one guest who started yelling at the worker. 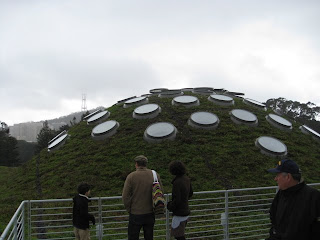 So without any "Passes" there were still a few other things we could look at.  We went up to the Living Roof.  The entire roof of the Academy is a 2.5 acre expanse of native California plants. Currently it was pretty much just grass. 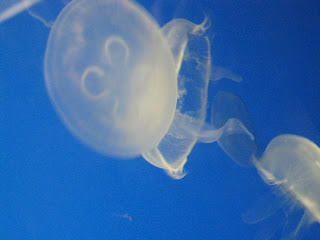 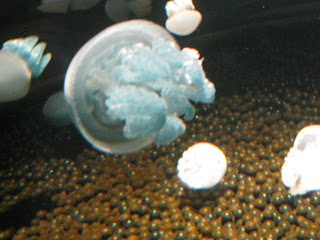 Above are a couple more pictures from the Aquarium.
So the lesson of this story?  Get to the Academy early.  Immediately get your "Passes."  Don't look over at the glass room Research Lab while in line for the Rainforest.  Finally, if you are an animal who resides in Golden Gate Park, RUN!
The Song Of The Day - Disco Science by Mirwais
Posted by Just Jon at 8:04 AM 6 comments: 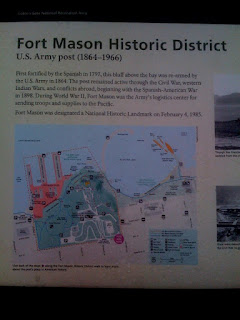 I have to thank my co-worker for alerting me to this tip.  Actually, I am surprised I didn't figure this out sooner.
I have shared on the blog that parking can be quite a hassle in the city.  My worst experience was driving around one Saturday evening for an hour and a half trying to find a place to park the car.  It is also quite common for me to have to ride the bus from where I eventually do park the car just to get back to my apartment.
Well, here is the pearl of wisdom that my co-worker discovered.  We both live within two blocks of Fort Mason.  Fort Mason has a large parking lot that is FREE from 5pm to 8am weekdays and FREE on Saturday and Sunday!
So on Friday evening when I was returning home around midnight from a friends birthday party, it dawned on me that I should not waste time driving around my neighborhood trying to find parking when I can just park at Fort Mason and be in bed under the covers within ten minutes.
Truthfully, this is going to revolutionize my decisions on whether or not I choose to drive places.
There is only one potential problem, I remember it being discussed that the city may start to charge to park at Fort Mason.  Until that day comes, I am putting it in park!
The Song Of The Day - Stolen Car by Beth Orton
Posted by Just Jon at 7:42 PM 5 comments:

Email ThisBlogThis!Share to TwitterShare to FacebookShare to Pinterest
Tag: Parking The Bay Area just came through a week of scattered rain showers everyday.  I think everyone was extremely happy when the forecast for this week was all "suns" and no "clouds".
That being said I wanted to share with you this great photo I took last week during a break in the rain of the clouds just beyond the Golden Gate Bridge.  Truly breathtaking!
The Song Of The Day - Sunshine On A Rainy Day by Zoe
Posted by Just Jon at 10:13 PM 1 comment: 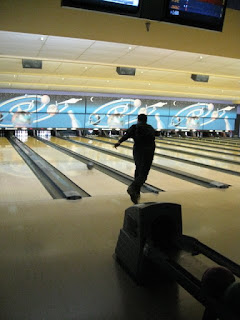 On Friday afternoon my co-workers and I went bowling at the "historic" Presidio bowling alley.
Seriously, this was the smallest bowling alley I have ever seen.  However, when you put it in the perspective that this was the bowling alley for an old military base, I guess it was perfect for its original purpose.
I haven't been bowling in years and was excited and nervous at the same time.  Nervous because I haven't bowled since developing the beginning signs of carpal tunnel syndrome.  I wasn't sure if the movement would aggravate my wrists.  I was excited because I happen to be an amazing Wii bowler.  I pretty much can bowl a strike or a spare every time on the Wii. 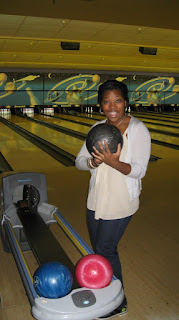 Well guess what?  Skills on the Wii do not translate to skills on the lane in real life.  In fact I was suddenly an expert at throwing consistent gutter balls.  I really wanted to join the kids on the other side of the alley who had the bumpers up.  No such luck. 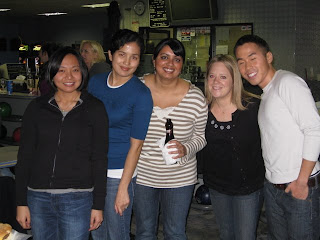 Despite my poor performance, which I am totally blaming on the antibiotics I have been taking, a good time was had by all.
* For the record, that is not me bowling in the top photo.  It's my director Larry.
The Song Of The Day - Strike It Up by Black Box
Posted by Just Jon at 9:34 PM 2 comments: 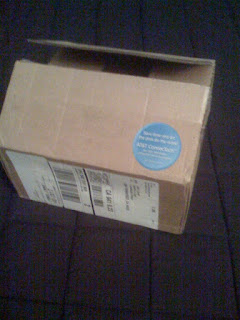 Just Jon is back in business!
With the arrival of the package above, I was able to set up my high speed Internet account. That's right, I am no longer "borrowing" my neighbors Internet access!
Loyal Readers you can rest assured I already put a password lock on my account!  There will be no "borrowing" from me.
And Loyal Readers, you haven't missed much in the last three weeks.  Seriously, I have been sick the whole time so I didn't have much to report.  Unless you consider episode recaps of Hannah Montana, The Suite Life Of Zack And Cody, The Wizards Of Waverly Place, and iCarly compelling reading material, I will spare you the details.
Things are looking up though because the antibiotics should be kicking in and we will be back reporting on the random things in the City soon!
The Song Of The Day - Back In Business by Madonna
Posted by Just Jon at 9:46 PM 5 comments: