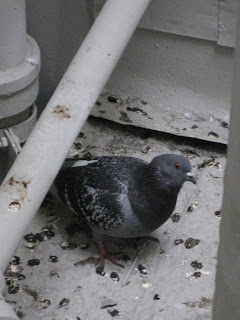 Update - The Pigeons have been evicted!
When I got home from work on Thursday there was a package on my doormat.
There was a composting bucket to comply with the City's mandatory composting law that recently went into effect and a notice.
The notice said that the building owner had "netted" the top of the light wells between the apartment units to prevent the Pigeons from coming back.
Woo Hoo!
The Song Of The Day - Sally's Pigeons by Cyndi Lauper
Posted by Just Jon at 7:10 PM 1 comment:

Email ThisBlogThis!Share to TwitterShare to FacebookShare to Pinterest
Tag: Apartment 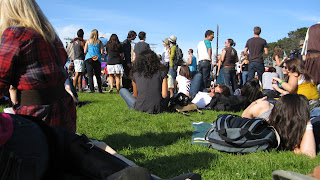 This past weekend was the Third Annual Treasure Island Music Festival. The two day event featured 26 performers from around the world. My friend Shagun and I attended Saturday.
Treasure Island is a man made island in the San Francisco Bay and it was closed to regular vehicle traffic over the weekend. In order to get to the festival ticket holders had to board shuttle buses at AT&T Park. Despite the extremely large crowd, the event planners kept the lines moving fairly quickly.
Once in line I was tempted to sell my ticket because people were offering to pay double the face value of the tickets for this sold out event.
Once on the island, we were able to wander through the "Treasure Chest" of food and merchandise booths. There was also a midway, ferris wheel, and several interactive attractions.
Everything at the event had a "pirate" theme. 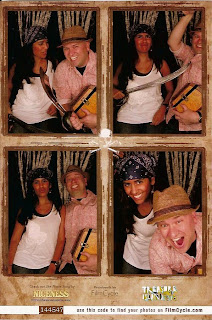 The above photos are from the Pirate Photo Booth. 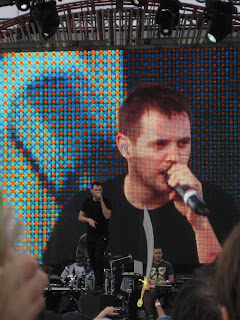 I really only wanted to go to the festival to see one of the twenty six acts. I wanted to see The Streets. The Streets is a rapper from England. I first heard his music on the play list when I worked for American Eagle. His raps were not only catchy because of his Birmingham accent, but also his knack for rhyme.
The Streets did not disappoint. He even jumped into the crowd at the end and crowd surfed. 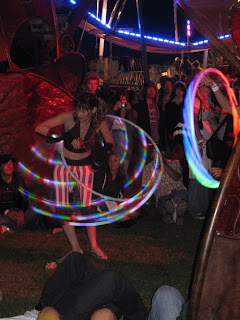 Throughout the festival there were roaming stilt walkers, hula hoopers, and double dutch jump ropers.
The crowd was pretty young and most of them looked like they had just come from shopping at an American Apparel clothing store.
All in all it was a good day and a good show.
I am glad that Shagun and I did not stay till the end of the event because apparently that efficient shuttle bus system was not so efficient at the end of the day. One of my co-workers said they waited in line for three hours to catch a bus back to the city!
The Song Of The Day - Cool On Your Island by Y Kant Tori Read
Posted by Just Jon at 11:33 PM 2 comments:

Loyal Readers, once again I have stumbled upon the rare species known only as "White Person" in a natural free and uninhibited state.
Fear not, because the White Person does not attack unless provoked and I maintained a safe distance at all times.
This time I was able to document the "White Person" performing the drunkus intoxicatious mating dance.
Please enjoy this rarely caught on tape brief moment of "dance."
The Song Of The Day - Lost In A Melody by The Delays
Posted by Just Jon at 11:04 PM 1 comment: 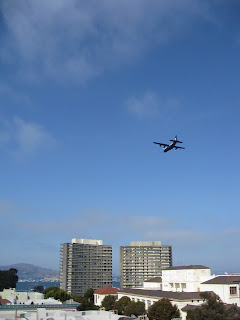 This weekend was Fleet Week in San Francisco. If you don't know anything about Fleet Week, it's kind of a big deal around here. The festivities reach a pinnacle on Saturday and Sunday from 12:30 to 4 pm when there is an Air Show above the Bay. The biggest act in the Air Show is the Blue Angels.
This years Fleet Week was at risk of not even happening due to the economic down turn which resulted in the inability to secure proper funding to pay for the event. At the last minute CVS/Pharmacy came in as a corporate sponsor and provided the needed cash to keep the event going.
The first event of Fleet Week is supposed to be a parade of ships crossing under the Golden Gate Bridge at 11:30 AM. At 11:29 I perched myself in front of the window to watch the boats.
Off in the distance I could see a fire boat crossing under the bridge shooting streams of water into the air.
All right here we go!
The fire boat was followed by what looked like a small Navy vessel.
OK, maybe the big one is coming next.
Nope.
That was about it.
Kind of a let down. 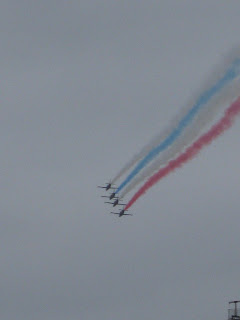 The Air Show started at 12:30. This is my fourth time seeing the show and it is pretty much the same thing every year.
Some stunt planes, a blimp, a passenger jet, a couple fighter jets, some more stunt planes, the Canadians (as seen in the photo above.) You get the picture.
The truth is most people are only here to see the Blue Angels. They want to hear those jets roar across the Bay at 3 PM. 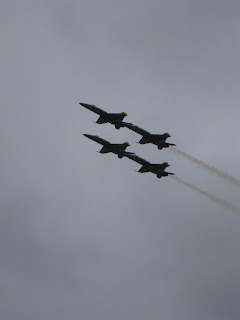 Finally three O'clock rolled around and it was time for the Blue Angels. Their performance always starts out with a larger cargo plane barreling above Van Ness Ave. heading straight toward Alcatraz Island on the Bay.
Car alarms began to sound due to the sonic vibrations this plane put out!
Woo Hoo here we go!
And then there they were, the Blue Angels had arrived!
People on roof tops across the City began to cheer in unison.
The Blue Angels made their second pass and came around for a third.
They were only about ten minutes into their performance when they disappeared into the distance.
Hmmm, I don't remember them doing that before.
And so we waited.
Me and the thousands of people who had lined the water front.
Five minutes.
Ten minutes.
I don't think they are coming back.
I ran to the computer to check the Fleet Week web site for updates.
"Parade of ships cancelled due to rough waters."
Oh, that explains why the ship parade was such a let down.
About ten minutes later there was a small blurb that said, "Blue Angels grounded due to fog!"
People were clearly upset.
I think they were not as upset because the Blue Angels were grounded; but more upset that there was never an official announcement that the show was over.
The one piece of silver lining was that weather permitting the Blue Angels would still fly on Sunday.
Well Sunday was even gloomier than Saturday.
Then SF Gate reported that the Blue Angels would still fly at 3 o'clock but with a modified version of their show.
Below is a brief video I took from the roof of my apartment building.
The Song Of The Day - Bye Bye Baby by Madonna
Posted by Just Jon at 7:19 PM 2 comments: 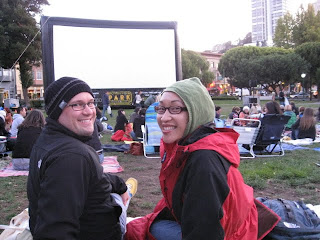 On Saturday, my friends and I went to "Film Night In The Park" for the final show of the season. Presented by the San Francisco Neighborhood Theater Foundation, the event is free with a suggested donation of $6.00.
As you can see in the above photo, even before the sun went down, it was very cold and the bottle of wine I brought didn't warm me up.
The movie being presented was Slumdog Millionaire. 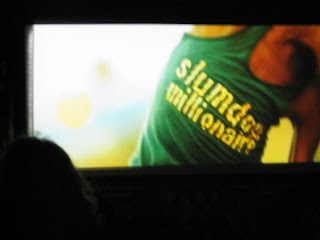 The movie was great, but I have to share a funny story from the evening.
As I was preparing to for the night in the park I layered up with jackets, fleece and a ski cap. I had a beach towel and a yoga mat to sit on. The yoga mat had come with my Wii Fit and I had never actually taken it out of the shrink wrap.
So I am riding the elevator down in my apartment building with a young lady who lives on the floor below me. We strike up a conversation and she notices the yoga mat in my bag.
"Where do you do yoga?" she asks.
"Oh...Uh...Ya, See...I don't actually do yoga. I am going to use this to sit on in the park. The mat came with my Wii Fit and I've never used it."
This was right up there with the time in college when I bought a babyGap diaper bag to carry my books and used the changing pad to sit on the grass during breaks. When people would ask me where I found such a functional bag I was never sure if I should tell them the truth.
And just like in college, the young lady didn't really have much to say after my revelation.
The highlight of the night was when I was waiting for the bus to go home. I looked down on the ground and there was a $20.oo bill. Instead of just grabbing it, I pointed it out to the crowd of people waiting for the bus and asked if anyone had lost a 2o? No one claimed it, and they all said I should take it. No arguments there.
The Song Of The Day - O...Saya by AR Rahman and M.I.A.
Posted by Just Jon at 10:27 PM 3 comments: 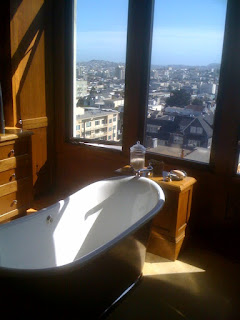 My fellow blogger and friend, Redhead Jen, is a member of The Junior League of San Francisco. On Saturday the JLSF presented the 15th Annual Home Tour.
For $65, ticket holders were given the opportunity to tour five homes in the Pacific Heights neighborhood. The street had been blocked off to create a Marketplace for artisan vendors. And these homes, they were not homes, they were mansions.
To put it in perspective, the first house on the tour is currently on the market for $12.9 million and features the stand alone bath tub as shown in the photo above. Check out the view you would have from your bubble bath!
The five houses on the tour ranged from traditional classic turn of the century architecture that had been lovingly restored to a house with a garden that features a renewable closed loop hydroponic growing system.
At first, I was a little turned off by the idea of paying $65 to tour five houses. But as I walked through the homes and admired the one with a "gift wrap room" and "putting green" in the bedroom, I realized that this might be the only time I will ever see inside these amazing residences.
The Song Of The Day - This House by Tracie Spencer
Posted by Just Jon at 9:54 PM 1 comment: 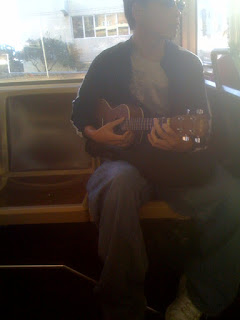 Sometimes riding the bus turns out to be an enjoyable experience.
Take for instance yesterday morning's commute to work on the 47. The gentleman in the above photo had a ukulele that he played while singing softly the whole ride.
I think he was channeling his inner Jason Mraz.
The Song Of The Day - Life Is Wonderful by Jason Mraz
Posted by Just Jon at 11:16 AM 1 comment:

Every year on the last Sunday in September the Folsom Street Fair is held. This street fair is the world's largest "Leather" event and it spans five blocks South of Market.
Everyone who lives in the City claims that you have to experience the fair at least once.
This year three friends and I decided to brave the event.
In the above picture we had just arrived and were ready to have a fun time. 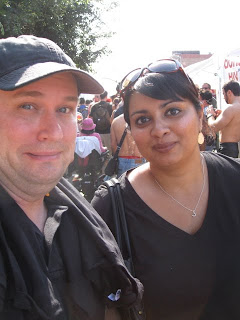 One block in and our outlook had totally changed. Clearly we were over dressed for the occasion.
Call me conservative, call me prudish, but seriously these are the only two publishable pictures that were taken the whole day.
The street fair is kind of like a car wreck, you know you shouldn't look, but you can't seem to turn away.
All I can say is I may never recover from the things I have seen.
The Song Of The Day - Leather by Tori Amos
Posted by Just Jon at 12:31 AM