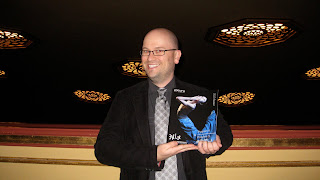 It's time to check another item off the proverbial list of "Things I've Always Wanted To Do!"
This weekend I attended the ballet.
In order to get the full appreciation for this story we must travel back in time twenty years to April 1990.
I have no shame in admitting that for my sixteenth birthday celebration I chose to go see The Little Mermaid. This fantastic musical launched the rebirth of Disney animation. Not only that, but in the movie, Ariel also celebrated her sixteenth birthday.
Fast forward twenty years to March 2010. My friend Shamoli and I are driving past the War Memorial Opera house and I ask, "Hey would you ever be interested in going to the ballet?"
Shamoli said, "Yes."
I said, "Great, I will ask if any of our other friends want to go and then we can pick a date."
Later that week I was standing on the corner waiting for a bus when I saw a sign that said the San Francisco Ballet was going to be doing a production of The Little Mermaid.
Shut up!
This is perfect, because frankly I was a little concerned that I might find the ballet boring. At least I like The Little Mermaid, so this should hold my attention.
I went to the Ballet's web site to find out when the show would be playing.
This Little Mermaid came with a warning: "Please Note: This critically acclaimed production focuses on the deeper, mature themes of the original story and is not recommended for younger children." Interesting!
I sent out feelers to the rest of my friends who responded lukewarm to no interest at all.
Come on! It's The Little Mermaid...and the DEEPER more Mature Little Mermaid.
No takers.
In the end it was just Shamoli and I who would be re-creating my sixteenth birthday celebration.
So the ballet starts...
and there is this random Charlie Chaplin like guy standing on a boat doing something to a wall.
Hmmm.
Then there is a wedding reception.
Then the random Charlie Chaplin like guy falls into the ocean.
Suddenly Charlie Chaplin like guy is dancing with mermaids.
Have you ever seen a production of Cirque Du Soleil? There is the random clown character that meanders in and out of the show. Well that was kind of what the Charlie Chaplin like guy reminded me of.
So an hour and fifteen minutes later we finally reach the intermission and by this point I am thoroughly confused.
Ursula the Sea Witch is not Ursula and SHE is a HE!
In order to help myself try and understand what is going on I decide to start assigning Disney Little Mermaid character names to the ballerinas.
Dudes who are dressed in all black and help The Little Mermaid swim...you shall now be known as Flotsam and Jetsam.
Random Charlie Chaplin like guy...I shall call you Sebastian/Scuttle/Flounder.
Captain/Prince...you are Eric.
School Girl/Princess...you are Vanessa.
I turn to Shamoli and say, "If I had not seen The Little Mermaid movie, I would have no idea what is going on right now."
I use the intermission to actually read the program description of the story.
This is pretty dark and twisty.
So the random Charlie Chaplin guy is actually a character named The Poet.
The Poet is in love with his dear friend Edvard who got married at the beginning of the ballet.
The Poet is so heartbroken over the separation he must now face from Edvard that a tear rolls off his face and lands in the ocean. The Poet, now at the bottom of the sea creates The Little Mermaid as a symbol of his longing for Edvard.
Really? Because I didn't pick up on any of that.
It gets better.
Then a boat passes over head and the captain of the boat is a prince who happens to look exactly like Edvard but is not Edvard. Fake Edvard is playing golf on the boat deck and hits a ball into the ocean. Diving into the ocean after his ball he is in the presence of The Little Mermaid but can't really see her.
Funny, because it looked like he could see her to me with the way they were dancing, I mean swimming together.
Then the male sea witch comes and there is a bad storm. The Little Mermaid saves Fake Edvard's life. Fake Edvard is awoken on land by a Princess who happens to look exactly like the woman that the Real Edvard married.
And the story just gets crazier and crazier until we reach Fake Edvard and Fake Woman Who Looks Like Real Edvard's wife's wedding day. Get this, The Little Mermaid is a bridesmaid in the wedding. Now that is just mean.
In the end Fake Edvard and Fake Woman depart for their wedding night and now The Little Mermaid is alone and longing for Fake Edvard just like The Poet longed for Real Edvard.
Wait for it...
So Creator (The Poet) and Creation (The Little Mermaid) become one and they search for a new world and end up living in the sea of stars in the sky!
Yes, that's right, The Little Mermaid is now in outer space!
This ballet was originally produced in Denmark and I think they may have been smoking something when they were writing it.
The only way I can describe it is The Little Mermaid meets A Clockwork Orange.
If I remove all the craziness, the dancing was beautiful. I especially liked how they would make The Little Mermaid look like she was swimming.
Here is a brief clip of The Wedding Scene in the Prince's Palace.
The Song Of The Day - Part Of Your World by The Little Mermaid
Posted by Just Jon at 10:41 PM 5 comments: 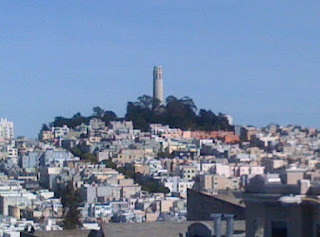 Sunday was a spectacular Spring day in the City.
A day for being outdoors. A day to take in the sights. A day you could get away with wearing shorts and maybe just a light sweatshirt and not be cold.
So while some may have gone for a hike. I took in the sights of China town.
This is what I discovered . . .
You just need to look up to see a free show of "chonies" on display. Coat hangers dangle from window sills all along Stockton Street drying under garments in the breeze. 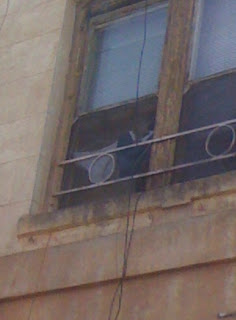 You will see it all! Granny Panties, Tighty Whities, Boxers and Boxer Briefs. No under garment is left out on this tour.
The Song Of The Day - Hangin' Tough by New Kids On The Block
Posted by Just Jon at 10:47 PM 2 comments: 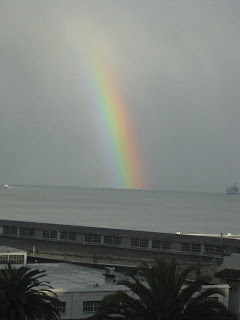 On Monday of this week the weather in San Francisco was quite schizophrenic.
Morning sunshine by afternoon was blanketed by gray sky. Lite rain was followed by torrential downpours.
In the end the Bay was graced by the most beautiful rainbow.
The Song Of The Day - Rainbow High by Madonna, Antonio Banderas, Jonathon Pryce and Jimmy Nail
Posted by Just Jon at 12:05 AM 5 comments: 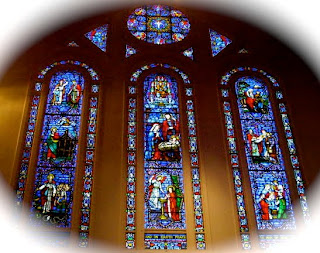 Once again I was overcome with the giggles in church today.
An older couple that usually sits behind me had their grandchildren with them this morning.
The little boy was very fidgety and spent the entire mass talking and playing with his toy car.
Nonno's blood pressure seemed to be rising as he kept trying to quiet the little boy while Nonna stole the occasional kiss from her angels.
When Nonno went to fulfill his "usher" duties the little boy called out, "Where's Nonno going?"
He watched Nonno collect the offertory and place the collection basket against a statue in the back to the church.
"Nonno, what are you giving that statue?" he called out.
Then we reached the point of the consecration when the priest turns the bread and wine into the body and blood of Christ.
As the priest drank from the chalice the little boy said to Nonna, "What is he drinking?"
I couldn't wait to hear the answer to this question.
I watched as Nonna paused for a moment thinking about what she was going to say.
Then she whispered, "Blood."
The little boy, who was approximately four years old, furrowed his brow and wrinkled his forehead with concern.
"Blood?" he said in a not so quiet voice.
"What kind of blood?"
It was then that my shoulders started to shake as I held my breath trying not to laugh out loud.
See how much I learned in church today?
Priests drink blood and always give the offertory to the statues!
The Song Of The Day - Ain't It Funny by Jennifer Lopez
Posted by Just Jon at 3:14 PM 2 comments:

Email ThisBlogThis!Share to TwitterShare to FacebookShare to Pinterest
Tag: Church 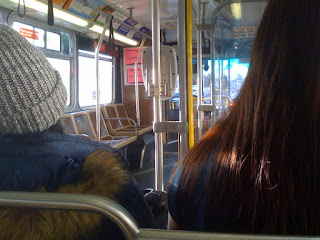 The scene:
A weekday morning at 8 AM.
An empty double length articulated Muni bus pulls up to the second stop on the route.
There are five people waiting to board the bus.
You board the bus second and take a seat half way back next to the window. (You are the girl on the right in the above photo.)
The person behind you, whom you do not know, chooses the seat next to you. (This is the woman on left in the above photo.)
Below is the inner dialogue that plays out in your head:
"Seriously?
The whole bus is empty! Why did you choose the seat right next to me?"
I know, I will slowly turn my head while giving you the evil eye and then let out a sigh.
"Ugh!"
Muni Etiquette -
Just like when choosing a stall in a public restroom; always pick the seat with the maximum number of empty buffer seats between you and the next passenger.
It's a common courtesy.
The Song Of The Day - In My Head by No Doubt
Posted by Just Jon at 10:50 PM 4 comments: