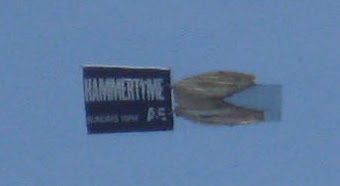 It's a bird!
It's a plane!
No!  It's a giant pair of MC Hammer pants.
Yes, that's right, in an effort to promote the new television show Hammertime on A&E, a plane flew over the city on Sunday with a giant pair of MC Hammer's gold parachute pants!
Nothing says 1990 like a pair of Hammer pants!  That is a fashion trend I am sure we all hope will never come back.
I just have to say, "Stop, Hammertime!"
The Song Of The Day - U Can't Touch This by MC Hammer
Posted by Just Jon at 9:21 PM

Email ThisBlogThis!Share to TwitterShare to FacebookShare to Pinterest
Tag: Advertisement