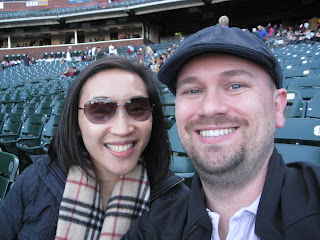 On Friday night my friend An and I attended "Opera At The Ballpark."  The production being shown was Tosca.  This was a FREE joint venture between the San Francisco Opera and the San Francisco Giants presented by Webcor Builders.
We were fortunate that through our company we had "Friends and Family/VIP" seats which allowed us to bypass the large crowds waiting to gain entrance into AT&T Park.
The FREE event had been advertised for weeks on bus shelters and banners around the City, so it was no surprise that the crowds were quite large.  Patrons were able to sit in the lower decks of the ballpark or bring blankets and sit on the field.  I was happy to be in first row seats right behind the dugout. 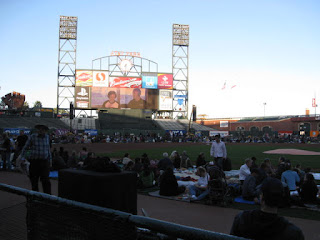 All week there had been rain in the forecast, so we were really blessed when the sun came out for the whole day.  That meant the chance of rain at night was slim to none.
I guess the one thing I missed in all the things that I had read about this special evening was the word "Simulcast."  I totally thought that they were going to set up a stage out in the outfield and perform an opera.  What I failed to read was that the performance was being "Simulcast" on the jumbotron at the stadium from the War Memorial Opera House on the other side of town.
Ooops.  Kind of a big thing to miss on the flyer. 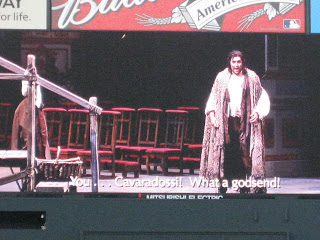 I also didn't really think about the fact that the opera would be in Italian and that I would have to read the English subtitles.
Ooops again.
But neither of these things were really too much of a bother because it was still going to be a unique experience over all.
As we were waiting for the 8pm curtain time I started reading through the program. Which lead to the following inner monologue
"Hmmm."
"This thing has three acts."
"Oh my God, it says this thing is three hours long.  And it doesn't start till 8!"
"Wait a second, we took public transportation to get here.  If this thing is three hours long, we won't be leaving until 11pm.  If everyone in this stadium is trying to get on the same Muni train platform we are never going to get home!"
And then a representative of The San Francisco Opera stuck his head out from behind the curtain and yelled, "Play Opera!"   With that the show got under way.
Despite the fact that we were just watching a "Simulcast" from across town, and the fact that it was in Italian with subtitles, I was really enjoying it.
I do think they probably could have cut the two twenty minute intermissions down to shorten up the three hour duration, but all in all this was kind of cool.  They even did a "Seventh Inning Stretch" and had the stadium patrons sing "Take Me Out To The Opera!" during the second intermission.
I will say the funniest thing I heard the whole night was when An and I were walking down The Embarcadero to get back to her car.  In order to help you The Loyal Readers understand why this is funny, here is a little background about the Opera Tosca.  The show is a tragic love story where in the end the female lead climbs to the top of a fortress and leaps to her death.  An older gentleman walking behind us said, "You know, she could have jumped off that building's roof a whole lot sooner for all I care.  I didn't like her one bit."   AMAZING!
So I started this blog with a picture of An and I when we first arrived at the stadium and the sun was still out.  Knowing that I was going to a night event outside in San Francisco I thought I came totally prepared:
Hat.  Check
The North Face Half Zip Pullover.  Check
The North Face Jacket.  Check
Gloves.  Check
Scarf.  Check
Not thinking to bring a blanket or an actual ski beanie.  Priceless.
Check out the "I don't care if I look like a complete idiot, at least I am sort of warm" photo below! 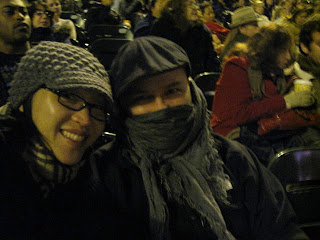 The Song Of The Day - Vissi D'arte from the Opera Tosca
Posted by Just Jon at 10:09 PM