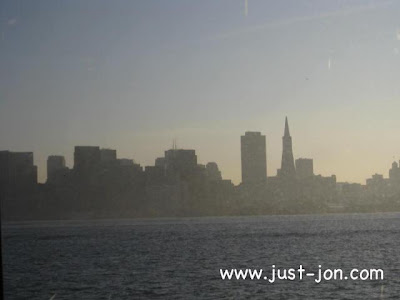 The City by the Bay is also known for restaurants run by world renowned chefs.   So it is not a shock that the cafeterias of these large corporations can become the "hot" lunch meal ticket.

At one point the Gap cafeteria which is also known as the "Gapeteria" even had its own Yelp review. (A link that has mysteriously disappeared off the Yelp site.)

Why is the Gapeteria so popular?

Well, first there is the view.  The largest of the Gapeterias sits on the seventh floor of their headquarters overlooking the Embarcadero.  On a clear day the view from the outside terraces is nothing short of spectacular.  The second reason the Gapeteria is popular is because of the reported high percentage of young professional single females that work for the company.

In recent years the Gapeteria faced competition from Google who allegedly offers free lunches to their employees.  One campus of these major corporations sit on opposite sides of the same street on the same block.  The Gapeteria is located on the North side of the street and the Google cafeteria is on the South side.  Both cafeterias face the Bay.  These two "G" cafeterias, Gap and Google, are now equally highly sought after invites from individuals who have building security clearance.

Last month while walking down the street facing the Google headquarters I looked up and saw a series of signs hanging in the windows. 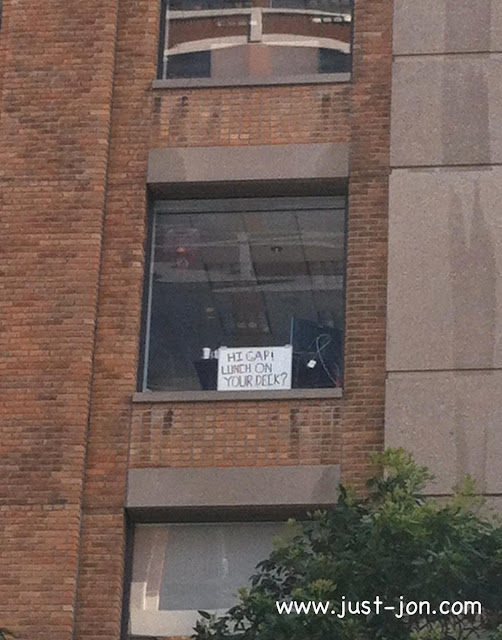 Other signs had faces drawn on them with thought bubbles; but they all included a request for an invite to the Gapeteria.

This request seemed rather puzzling since the Google employees allegedly get free lunch.

I turned around to look up at the Gap building to see if anyone had responded to the request and there were no postings.

This week as I went to meet a friend for lunch, I was walking toward the Gap building and there they were; responses back to all the Google requests for a lunch dates. 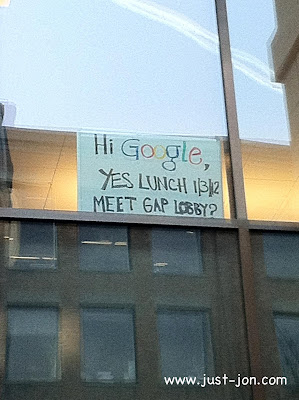 Notice that the Gap took the time to actually draw Google's rainbow logo on their sign.  Nice touch!

I am looking forward to see what next week's signs will say.

The Song Of The Day - Meet Me Halfway by the Black Eyed Peas
Posted by Just Jon at 2:10 PM