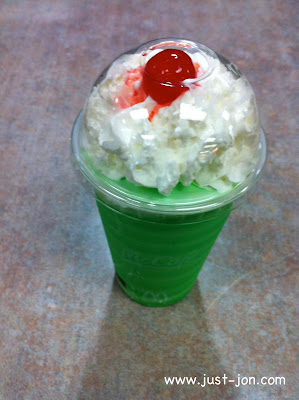 My six year old self told my thirty seven year old self that the McDonald's Shamrock Shake was so delicious that I must re-live that magical childhood moment when my taste buds first came in contact with the green-dyed mint milkshake that is only available for a limited time.

The reality is I could not even remember what a Shamrock Shake tasted like.

It had to be good right?

I mean it was held with such high regard in the deep recesses of my brain.

So in honor of St. Patrick's Day I stopped into my local McDonald's for what was sure to be a highlight in culinary experiences.

After placing my order I watched as the dark green liquid shot through a clear tube and mixed with the vanilla ice cream to make my Shamrock Shake.

The milkshake reached the top of the cup and the McDonald's employee popped the lid on, shot some whip cream into it and topped it off with a bright red cherry.

My inner six year old self was giddy with excitement as he handed the Shamrock Shake to me.

This green milkshake seemed darker than I remembered.  Or maybe that is because back in the 80's it would have come in a paper cup rather than a clear plastic McCafe cup.  I had probably never seen the color of a Shamrock Shake in full view.

I stuck a straw into the shake and closed my eyes as I sipped my first taste.

It was just kind of a bland mint milkshake.

I remembered McDonald's milkshakes to be so thick you had to put two straws through the lid to suck it up.   This was like drinking a Frappe.

So I guess the Shamrock Shake was better left as a cherished childhood memory.

On that note Loyal Readers I bid you a Happy St. Patrick's Day!

Email ThisBlogThis!Share to TwitterShare to FacebookShare to Pinterest
Tag: Food