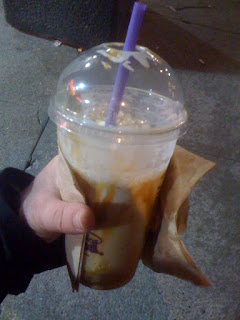 It's Lent.
In the Catholic faith that means giving something up for the 40 days that span from Ash Wednesday to Easter Sunday.
This Lenten "Sacrifice" is to remind us of the 40 days of fasting and prayer that Jesus experienced in the desert.
Some people have re-defined the Lenten Sacrifice. Instead of giving something up, they try and do something good for 40 days. Frankly; that usually turns out to be harder than giving up a particular vice.
A few years back I tried to deny my sweet tooth its satisfaction by giving up chocolate. That choice negatively impacted all those around me as I was grumpier than ever!
I also thought the chocolate sacrifice would help me loose weight. Not even close. I gained weight. My brain was so fixated on its desire for chocolate I kept trying to eat other things to satisfy my cravings. Nothing worked.
This year in an "Oh my gosh I need to think of something to give up for Lent" moment; I went with the first thing that popped into my head.
Dessert.
Six hours later on day one I was already re-thinking my choice.
How stupid could I be? I am the type of person that has to have some form of dessert with every meal.
By hour eight, immediately following dinner, I began to rationalize. What technically defines dessert?
Dessert usually comes after a meal. What if I wait two hours, then have a snack that happens to be a cookie. Is that dessert? Technically no, that would be a mid-evening snack. And so my twisted logic went on and on trying to figure out how I could get some treats without breaking the rules.
By day two I decided the only thing that would end this mental debate would be to look up the actual definition of the word "Dessert."
I went to dictionary.com and crossed my fingers for a definition in my favor!
dessert [dih-zurt]
-noun
1. cake, pie, fruit, pudding, ice cream, etc., served as the final course of a meal.
2. British. a serving of fresh fruit after the main course of a meal.
Yes!
Later that day I used my new found knowledge to my advantage when there was a birthday celebration at work. They rolled out the ice cream cake and started passing around slices.
"Why, yes I would like a piece," I said.
One of my co-workers looked at me and said, "Didn't you just yesterday tell us you had given up dessert for Lent?"
"This is not dessert," I said. "This is a free standing celebration of someones birthday not preceded by a meal. Therefore I am perfectly entitled to my slice of ice cream cake."
Yes, I know, my lack of will power is sad.
I have also decided that a late night decaffeinated white chocolate mocha from Starbucks does not count as a dessert. That is a drink.
The good news is, I am totally not grumpy like when I gave up chocolate.
It's all in the definition!
The Song Of The Day - The Definition by Brandy
Posted by Just Jon at 12:12 PM