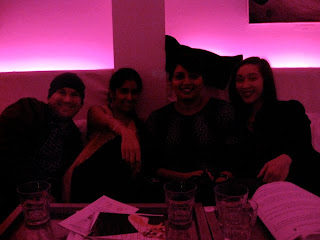 Bi-annually the City of San Francisco holds an event called Dine About Town. During the event restaurants offer special prix fixe menus for lunch and dinner.
This year, patrons could get a two course lunch for $17.95 or a three course dinner for $34.95, drinks, tax, and gratuity not included.
For this winter Dine About Town my friends chose the restaurant supperclub.
As I have mentioned before on this blog, I am not the foodie in the group, so I usually let my friends pick the restaurant and I just show up when I am told.
Several weeks ago when my friend An picked the date for our outing and I wrote it on my calendar at work. I didn't even pay attention to what restaurant had been picked.
The day before the event I looked up the appointment and found the name of the restaurant we were going to.
supperclub.
I didn't know anything about this restaurant so I went to their web site to find out what the menu looked like. The web site featured a semi naked man laying on a bunch of pillows.
I honestly thought I had gone to the wrong web site. What were we getting ourselves into?
When we arrived at the restaurant we were greeted by the host/hostess named Lee who was dressed in little more then a corset, fishnets, and garter belts. He checked us in, offered us an hors doeuvres and told us we could have a seat in the bar.
As the bar became more and more crowded the wait staff started to come around and ask if we were "ready to be put in bed." 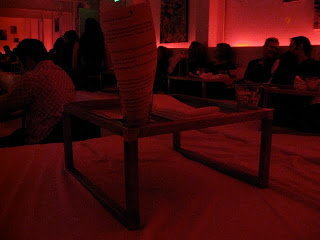 The supperclub does not have tables and chairs, it has communal beds. Each party has a portion of the mattresses that run the perimeter of a large industrial like building divided into two levels.
After we removed our shoes and climbed into bed we started to review the menu. I love that the menu had the following disclaimer on it:
"In short, we are not your typical restaurant or club.
In fact, to classify us would be a mistake.
If you are easily offended, want to eat a quick meal or are not into exploring the intricacy of what San Francisco really is, then please put back on your shoes, drag yourself out of the white beds, and leave at once.
We are not for everyone, and you will do us both a favor."
Are you kidding? I am totally in now. This is going to be awesome! 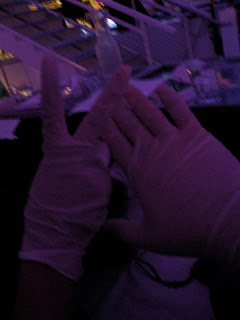 Shortly there after, one of the wait staff came around tossing latex gloves at all the guests periodically saying, "this is for eating the first course." 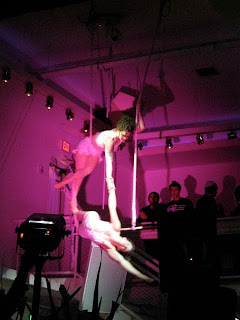 The first course was pan seared radicchio with buffalo mozzarella, balsamic vinegar, pine nuts, and bruschetta. It was delicious. I used that latex glove to wipe the platter clean.
As we enjoyed the first course the first performance started. A trapeze was lowered into the center of the room and two aerialists began to perform.
I would describe the scene as a modern day Moulin Rouge or where club kids/ravers go to work when they are in their 30s. 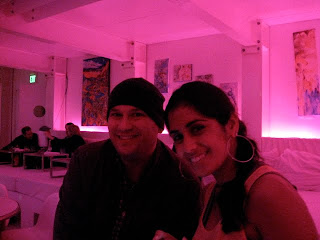 The second course was heirloom chicken breast with sauteed turnips, broccoli and salsify in chicken stock with black kale. It was just OK.
What was great was the second course performance. The host/hostess from earlier in the evening came out and performed a burlesque striptease to a slowed down remake of Britney Spears' Toxic. 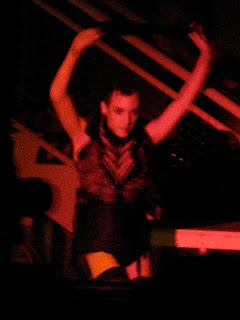 The third course was rhubarb crumble with vanilla ice cream. All I can say is a little rhubarb goes a long way, and there was a lot of rhubarb.
During the third course they did a fashion show. The highlight of the fashion show came just after the last swimsuit model walked off the stage. One of the drunken patrons stripped down to his underwear and followed her on the runway. Classic!
It was a very fun evening and I would go back. The atmosphere was light hearted and fun. I would however like to see how the food is when it is not a prix fixe menu limited to $34.95. My one concern about Dine About Town is that I worry that you are not getting the best the chef has to offer because they are trying to hit a set price point.
The Song Of The Day - Sing For Your Supper by Carroll Gibbons and the Savoy Hotel Orpheans
Posted by Just Jon at 10:57 AM