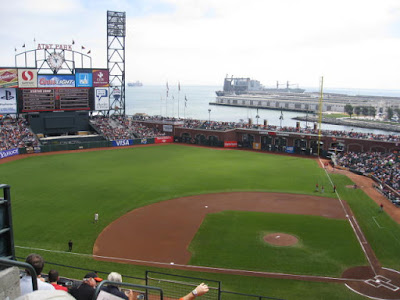 Labor Day Weekend 2011 my parents came to visit San Francisco and I thought it would be fun to take them to a baseball game played by the World Champion Giants. 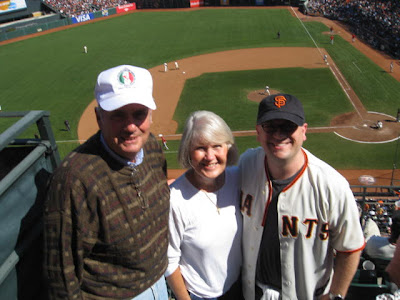 Here's proof that my Dad (a Dodger fan) attended the event at AT&T Park.

And I quote, "Until McCourt is gone, I am OK giving $35 to the Giants for parking."

Again, the idea was that my parents would get to see the World Champion Giants play.

Unfortunately, the Giants are not playing like World Champions currently and suffered a miserable loss to the Arizona Diamondbacks. 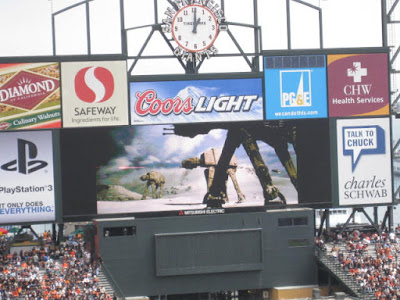 Despite the loss, in what can only be attributed to divine intervention, it turns out that Sunday's Game was "Star Wars Day" at AT&T Park.

There were lots of people dressed in full Star Wars costume.  Princess Leia, Chewbacca, and Darth Vader just to name a few.  At the beginning of the game the Empire, I mean Umpires were escorted onto the field by Storm Troopers.  When the players faces flashed up on the big screen they were cloaked in Jedi hoods.

There were quotes, trivia, and even a mini movie that superimposed Giants mascot Lou Seal into the Star Wars Trilogy.  It was a lot of fun. 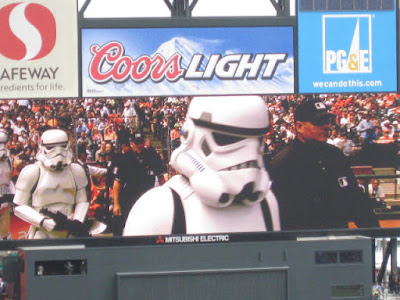 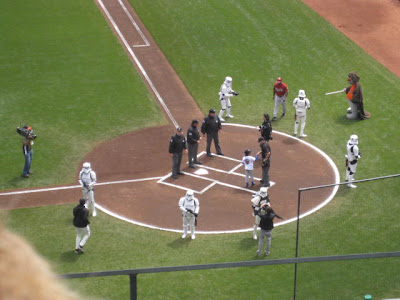 I think my Dad really started to enjoy the game when the Arizona Diamondbacks manager, Kirk Gibson (a past life Dodger), had to come out onto the field when Diamondbacks player Justin Upton was ejected from the game for arguing a call.

Yes, the Giants lost, but today was a beautiful day in the City to take in a baseball game.

The Song Of The Day - Loser By Beck