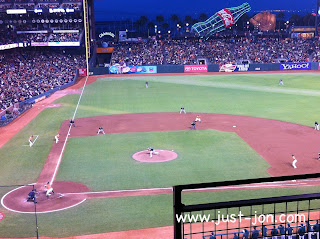 Friday I lucked out and won a trivia contest at work.  My prize was two tickets into the company's luxury box for game one of the Battle Of The Bay between the San Francisco Giants and the Oakland A's.

Even better was the fact that the tickets got me into a free wine tasting event on the suite level two hours before the game started.

My pick of the best wine...

A Sangiovese from Seghesio Family Vineyards.

Now, about baseball; when the series came to a close on Sunday the Giants had won two of the three games.

But what may be most surprising what when my friend Danilo, who also won tickets, showed up wearing an Oakland A's jersey!   Some of you Loyal Readers may remember last year when I told you that he was the biggest Giants fan I knew.

Well they haven't been playing very good the last two seasons so maybe his loyalty has drifted across the Bay. 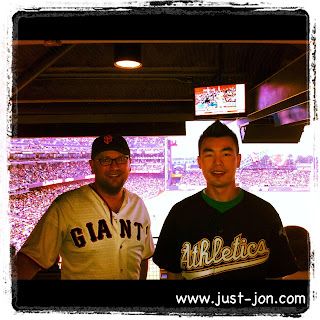