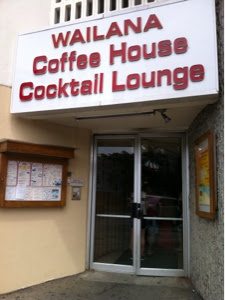 Today was one of those days that seemed to be all about where is my next meal coming from?

I started the day off at Wailana Coffee House; which apparently based on the sign doubles as a cocktail lounge at night.

Wailana Coffee House is straight up state of the art if the year was 1960.  From the faux dark brown wood paneling to the orange brick interior facade to the speckled green Formica counter tops.  You can't help but look around and think that this was a happening place back in the day.

I was intrigued by an item on the menu called the Pancake Sandwich, but when I placed my order the waitress told me I should just get the "All You Can Eat Pancake Breakfast" instead because it was more food and cheaper.  Apparently she sized me up and knew I was president of the Chub Club.  I asked if it would still come like a sandwich and she said, "No, it all comes separate but you can put it together yourself  if you really want to."

I forgot how much I really enjoy Coconut Pancake Syrup.  Except for the fact that the syrup was the same color as the plate and  I couldn't tell where to dip my pancakes.  #RealProblems

After breakfast I walked to the Ala Moana shopping center where 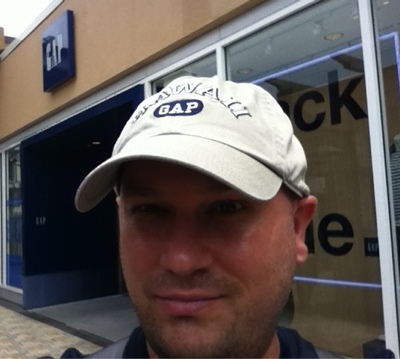 this happened.  It was only a matter of time right? 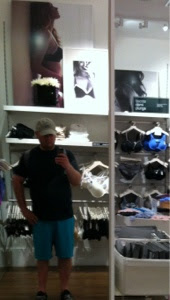 And since I was there I might as well check the signage on the camisoles.  Good job Ala Moana, your signs were compliant. 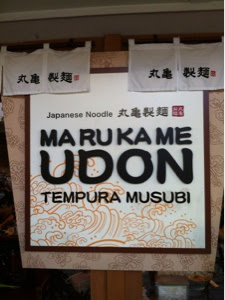 Next up on the food adventure was Marukame Udon.  This was another recommendation by my co-worker.  Believe it or not, I have never ordered udon before.

Marukame is organized cafeteria style where you pick up your noodles then your tempura and drink.  It must be good because the line to get in stretched down the block.  The line moved very quickly and I started to get a little stressed out because I realized I had no idea how to order udon or how to pronounce the different udon offerings.

I didn't want to repeat the embarrassing meal a few years back when I ordered Pho for the first time.  I didn't know you were supposed to mix all the ingredients in the bowl and I ate them all separate as a packed restaurant watched with equal parts shock, wonder and awe at this fool who didn't know any better.

I pulled out my smart phone and started googling the menu items so that I could understand what they were.  I decided that Kake Udon was probably the simplest and safest bet for me.  It was basically plain noodles in broth. 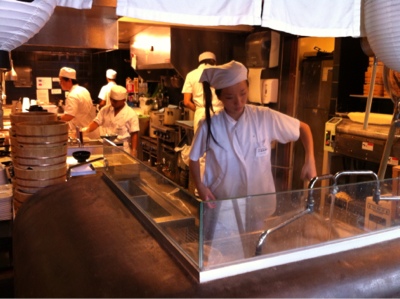 Here is Yum Yum preparing the noodles.  (Hand to God her name tag said Yum Yum which I took as a good sign for my first udon experience.) 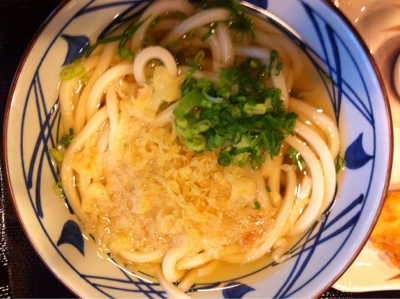 The udon was good, but I have nothing really to compare it to.  What I enjoyed even more was the tempura.  I had sweet potato and pumpkin.  They were delicious. 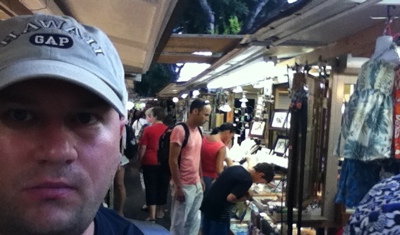 While walking back to the hotel I stumbled upon Waikiki's equivalent of LA's Olvera Street.  A long aisle of narrow carts selling Hawaiian trinkets that are probably made in China. 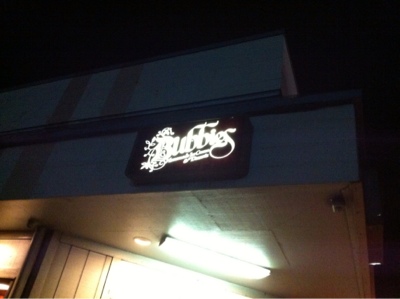 Later in the evening I met up with my friend Claire who lives on the Island.  She took me to Bubbies. 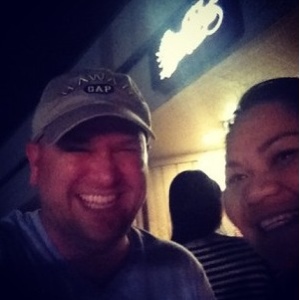 Bubbies is a Mochi Ice Cream shop and it was HEAVEN! 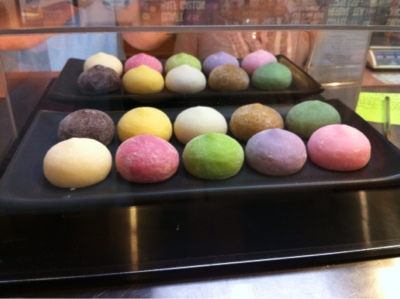 Once again there was a line to get in, but it was worth it!

My mouth is drooling just thinking about those last two.

Thanks Claire for taking me to Bubbies!  So good!