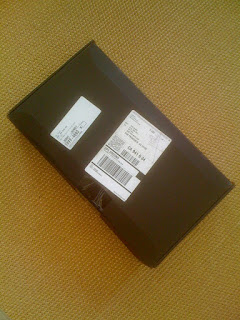 So remember how for a year and a half we were inundated with television and radio commercials announcing the government mandated change that would require the shift of television broadcast from analog to digital format?
Remember how those same commercials said that you would need a converter box if you were still using an antenna to get your television signal?
Yes, well I thought I was exempt from all that because I had cable TV.
Then last May I received a call from my cable provider who told me that I needed to sign up for a cable box if I wanted to continue to watch television. I quickly informed her that it would not be necessary to get this box because I was using cable already. She told me that I was incorrect and that come June 12th, 2009 I would need her magic digital box converter. Then she told me the box was "Free!"
I then had a lengthy conversation about how I was not willing to pay any more for my cable services and that I wanted to make sure there were no hidden fees and that my bill would not be going up just because I agreed to get her magic box.
She assured me she was on the up and up and that I had nothing to fear. My cable bill would not go up.
So I agreed that she should send me the box right away.
That week a big black box arrived in the mail complete with lots of cables, a new remote, the aforementioned magic box and more instruction booklets than I would ever want to read.
The whole thing was overwhelming. I started to think about how I was still getting all the channels I was supposed to get and how I still thought the lady was wrong and that I didn't really need the box. So with that I decided to shove the magic box into the back of my closet and enjoy my nightly television shows.
I thought if anything on June 12th I may have to pull the box out of the closet and hook it up.
June 12th came and went and my television channel line up did not change.
Ha! I knew I was right! I didn't need your magic box after all.
Over the next few months I forgot all about my magic box in the back of the closet.
Then on Tuesday this past week I came home from work and flipped on the TV to watch a little AC 360 while I ate dinner.
Uh oh....Snow! How about MTV? Snow! VH-1? Snow! E!? Snow! Bravo? Snow! Lifetime? Snow!
I was still able to get the network television broadcasts, but I never watch those channels.
Dinner quickly got shoved aside.
I need to find that magic box in the back of my closet!
I cracked open the box and started quickly scanning the numerous instruction manuals.
"Upon receipt of this package, please call our 1-800 number to complete your set up."
Oh crap, its been four months since I got this package, I hope my access code still works!
I called the 1-800 number and spoke to a nice woman who spent the next 15 minutes ensuring that my magic box was properly receiving its new digital signal. We then spent about 10 minutes making sure that my new TV remote was working properly. She explained that it would take about 45 more minutes before all the TV stations were properly broadcasting a signal to my magic box.
Um, did she realize it was already 7:55pm and I needed this bad boy to be up and running by 8 to see the new Fall Season?
After a couple minor hick ups the magic box was working like a dream and I was able to see all the shows I wanted.
Thanks magic box! I knew I needed you all along. Not.
The Song Of The Day - Heart Shaped Box by Nirvana
Posted by Just Jon at 12:06 PM