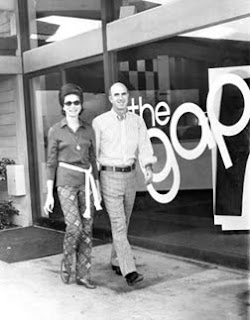 On Sept 27, 2009 the retail world lost one of the greats when Don Fisher, co-founder of The Gap, passed away at the age of 81.
I started working at The Gap when I was nineteen years old. Immediately I felt a sense of belonging. A sense that can only be equated with being part of a family. "Family" is often the term I have used to describe my co-workers. They are all part of the Gap Family.
That sense of family I truly believe cascaded down from the top. And the top was synonymous with two names; Don and Doris Fisher.
As a sales associate in the field; the Fisher's garnered the same respect and awe as Hollywood celebrities. The Fisher's were and are Gap royalty. And as a Gap employee I felt I was part of their family.
I have had the honor and privilege to be in the presence of Mr. Fisher on several occasions.
The first time I saw Mr. Fisher in person was when I had just transitioned from the field to the corporate office. I was eating lunch in the cafeteria when I realized that Mr. Fisher was sitting at the table behind me. I was giddy with excitement to be that close to the founder of the company that I so much loved to work for.
What impressed me most was that Mr. Fisher ate at a table right there in the cafeteria with all the rest of the employees. He didn't separate himself. He sat with his people. On numerous occasions I saw Mr. Fisher like this in the cafeteria.
In typical Just Jon fashion, my one personal interaction with Mr. Fisher was kind of embarrassing.
I was heading toward the exit of the office building when I saw Mr. Fisher was walking toward the door to come in. I slowed down so that I could hold the door open for him.
Normally, when you hold the door open for someone they say "thank you" for doing so.
I was so excited to be in his presence that as I held the door open, I said "thank you" to him.
Mr. Fisher looked a little confused by my statement, but nodded his head and continued on his way.
What I was trying to convey was that I was so thankful for having the opportunity to be a part of his organization. I was thankful to be a part of this family that he had created. I knew that working for The Gap had helped to define me and mold me into the person I am today. I was thankful and I wanted him to know that.
This past year I was able to see Mr. and Mrs. Fisher speak to the headquarters employees. Like celebrities, they received a standing ovation as they entered the room. As they told their stories I was moved. They have touched so many lives around the world and made them better. Why? Because the Fisher's promote giving back to the community. They lead by example.
My thoughts are not only with the Fisher Family, but the entire Gap Family during this time of loss. And once again Mr. Fisher, thank you for giving me the opportunity to be a part of the family.
The Song Of The Day - Give A Little Bit by Supertramp
Above photo from Individuals - Portraits From The Gap Collection, Melcher Media
Posted by Just Jon at 9:34 PM

Email ThisBlogThis!Share to TwitterShare to FacebookShare to Pinterest
Tag: Tribute