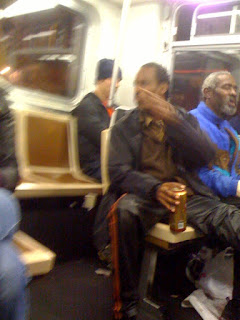 Who is ready for the first Muni story of 2010?
I am!
And it's a good one!
This story takes place on the 30 line. The 30 is more commonly known as the "Dirty 30." Urban legend says that it got its name "Dirty 30" when a passenger brought a live chicken onto the bus while passing through China Town. The driver allegedly told the passenger that a live chicken could not be on the bus and supposedly the passenger proceeded to kill the chicken right then and there.
The 30 is also the bus line that most recently became a YouTube sensation when a fight between an older Asian woman and an African American girl was filmed and posted. The Asian lady won the fight!
I ride the 30 a lot. It is one of the bus lines I have to take in order to get home.
One of the other frequent riders is a transient I have given the name "Gus."
"Gus" is a drunk! Not a little drunk. Majorly drunk!
For the most part he seems harmless, he just likes to talk really loud. Sometimes he is actually funny. Especially when passing through China Town. He likes to yell at the little old Asian women and they freak out.
Last Wednesday night I boarded the 30 for my ride home.
Several stops later I suddenly felt like my personal space was being invaded. There was "Gus" standing above me with a lit cigarette.
Yes, that's right, I said a LIT cigarette!
He was leaning over me so that he could throw the cigarette out the window. As the cigarette ashes fell onto my lap I could see that "Gus" was concealing an open 40 ounce beer can under his coat.
Great! PLEASE don't sit next to me!
I have found that it is best not to make eye contact. If you do, "Gus" then becomes your traveling buddy for the rest of the route.
Fortunately for me, and unfortunately for the young mother and small child in the back row; "Gus" took a liking to them and kept trying to talk to "Baby Girl."
Well, Baby Mama was not having anything of it and was trying to shield her daughter from "Gus."
It was then that I heard "Gus" say to his friend for the first time, "Man, I have to pee."
Now, because I have ridden the bus with "Gus" before, I knew that he was going to be on the bus the entire time I was. So that meant that I had better start monitoring this situation.
Then "Gus" turned to the passenger sitting behind him and saw that he was holding an empty drink cup.
"Can I have that cup?" "Gus" asked the guy.
"Sure, I don't need it," the guy said.
Uh oh, this could get really bad was my first thought.
"Gus" was getting more and more fidgety and again said to his friend, "I have to pee."
That was when he started to unzip his pants!
I immediately got up and headed for the stairwell. I wanted none of this.
Other passengers all started moving forward to get away from what was happening.
One gentleman was able to get up to the driver and alert him of the situation at the back of the bus.
At this point "Gus" had already relieved himself. Not wanting to get in trouble he said in his normal loud voice, "What is that guy saying up there? I didn't do anything. I would never do that in front of a child."
The bus reached the next stop and I bolted out the door. I did not care that I was no where near home. I would rather walk. Almost everyone from the back half of the bus exited with me. The last thing I could see was the driver walking back to confront "Gus."
All I could think about was the fact that I know I am bound to be on a bus with "Gus" again.
So tonight I had to get gas for my car. As I was waiting for the tank to fill up I could hear someone over my shoulder yelling incoherently. I turned around and saw that it was "Gus!"
And what was "Gus" doing? Oh, he was relieving himself in public again!
What are the odds that twice in one week I would be exposed to this gentleman urinating in public!
Gross!
The Song Of The Day - Dirrty by Christina Aguilera
Posted by Just Jon at 11:58 PM