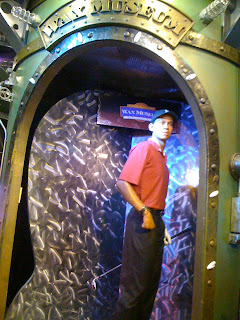 Every tourist destination city has one. It's that part of the city that is in all the tour books. It is usually filled with lots of restaurants, hotels, and shops that sell every trash and trinket available with the city's name stamped on it.
That same part of town is usually avoided by the people who actually live in the city.
In San Francisco, I would classify that part of the City as Fisherman's Wharf.
The only reason to go to Fisherman's Wharf if you live in San Francisco is to get a "Double Double" from In N Out. Unless of course you enjoy being in a mass crowd of slowly moving people blocking the sidewalk to watch the infamous "Bush Man" jump out from behind a trash can to scare people. (See YouTube link above.) 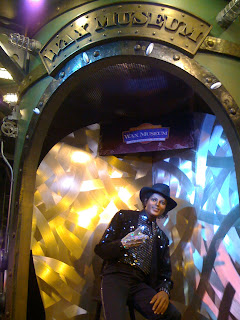 In addition to the restaurants, hotels, and shops trying to grab the elusive tourist dollar; there is usually a Wax Museum and Ripley's Believe It Or Not.
Several years ago my friend Erin and I went to these museums on Hollywood Blvd. in Southern California. These two museums were craptacular! I mean REALLY REALLY bad! It was the biggest waste of money.
So now whenever I am down at Fisherman's Wharf I like to see what "Celebrities" the Wax Museum has placed on the "Lazy Susan" front display to try and draw tourists in.
Well kudos to the Wax Museum for putting its best celebrity scandal foot forward. While the rest of the world wonders where Tiger Woods has been hiding out for the last month, tourists visiting our City know that he has been hanging out with Michael Jackson at the Wax Museum down at Fisherman's Wharf.
The Song Of The Day - Fake by Simply Red
Posted by Just Jon at 10:52 PM