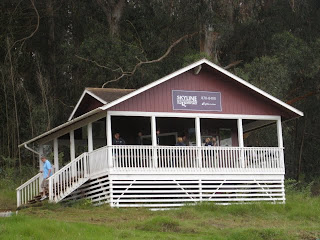 The last several months have been very busy and I have not had the energy to write as much as I would have liked to. As we enter 2010 I look forward to continuing to share with you stories from my life.
I must say that when I started this blog about two years ago I never dreamed I would still be doing it today. The blog has really taken on a life of its own. Now when I am with family and friends one of the first questions that usually gets asked is "Will this end up on the blog?" My answer, "Maybe."
I want to take this opportunity to say thank you to all my friends and family who have allowed themselves to become a part of this living history.
Now for a few statistics:
Even though there are only 9 official Loyal Readers (please see their pictures to the left, and feel free to sign yourself up too); I know there are a lot more of you out there.
In 2009:
All I have to say is "Wow!"
Thank you to everyone who has taken a few minutes out of their day to read my blog.
I can't close out 2009 just yet. There are three tales from this past year that did not make it onto the blog for one reason or another. All three events are definitely blog worthy and have been patiently waiting for their turn to be told. So without further adieu, here are the final three stories of 2009! 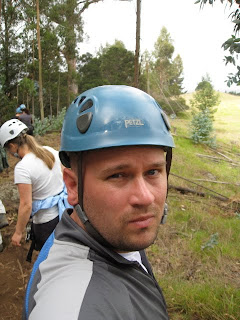 Let us venture all the way back to Oct 29th. I was still on my vacation in Maui, HI and was about to embark on my final adventure; Zip Lines!
That morning I got in the rental car and drove about an hour from the Ka'anapali coast up to Haleakala for my Skyline Eco Adventures. Skyline Eco Adventures was the first Zipline Tour in the United States and was featured on the television show Little People Big World. There are now other Zip Line tours on the Island that boast of longer and faster "Zips" but I figured my first time "Zipping" should be on a tried and true course.
The Zip Tour starts with a "walk through the woods in beautiful upcountry Maui" where you begin the first of 5 Zips.
After a brief tutorial from the two guides its time to fly.
As you can see in the above picture, I found the first 4 Zips to be a bit stressful. The guides had filled my head with so much information I was totally over thinking it.
"Run off the platform!"
"Don't stop when you get to the edge, keep running! If you stop you will drop straight down and hit your butt!"
"Steer by turning the carabiner with your hand!"
"Be sure to come in straight on the landing!"
"Get your Fred Flintstone feet running before you land and then run run run it off - but don't hit the tree!"
"Sit down into your harness like a barcalounger!" 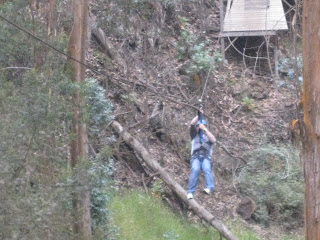 So here is the one picture of me Zipping through the trees. My form; not so good. I always started out straight just like they instructed us to and then right before the landing platform my body would start to twist.
It's so comforting when the guide looks at you after he has caught you on the landing platform and says, "Man, you are really gonna make us work today."
"Sorry?" 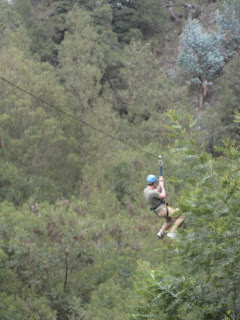 On the final zip they told us not to worry about steering. They said we just needed to run as fast as we could off the platform and then sit back and enjoy the ride.
Well let me just tell you there is something a little counter intuitive about running toward the edge of a platform then right off into the tree tops. Your brain is saying stop even though your body is going full speed ahead.
The last Zip was amazing. You actually zoom right past the landing platform, slide back to the middle of the line, and then forward again toward the landing platform where the guide is up on a ladder to catch you!
I really enjoyed the Zip Line and look forward to doing it again!
For our next tale we head back to Nov. 6th.
Several of my friends are "Foodies."
Me, not so much. I would be happy eating a turkey sandwich everyday.
That being said, I do try to go along for the ride when my friends want to try a restaurant they have heard good things about.
Earlier in the year I mentioned to my friend An that we should one time just buck up and pay to eat at the most expensive restaurant in San Francisco. I figured it would be a once in a lifetime meal and then we could check it off the list of "Things To Do."
An immediately said, "Great, we will go for my birthday!"
At that time it was June.
I said, "An, isn't your birthday in November? We can go before then."
An said, "No, we'll go for my birthday."
So five months later; An, Shamoli and I set out on our culinary adventure at Gary Danko! 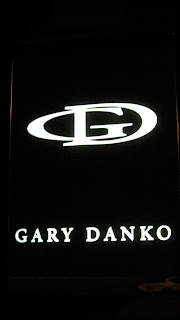 I had read in the newspaper about the restaurant and I was very excited. Not excited for the meal we were about to eat; no I was excited because in the article it said that at the end of the meal the wait staff brings the guest a wrapped pastry to be eaten for breakfast the next day!
Shut up! All I could think about was how great this pastry was going to be! 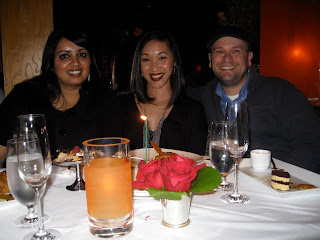 The wait staff was incredible. There was a slight delay in our seating time and the staff kept coming up to us to let us know about the status of our table. Because of the delay they brought us free Champagne!
I opted for the three course meal. Shamoli got four and An got five. The size of each course was based on the number of courses you ordered. All three of us ordered some form of soup for our first course and because I only had three courses my bowl was the largest.
Each plate that was brought to the table was beautiful. (See An and Shamoli's cheese course below.) 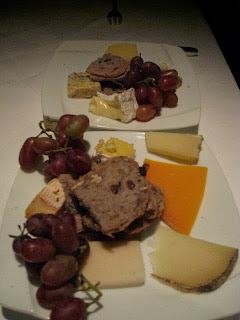 I enjoyed the dessert course the best! Here is what I ordered. 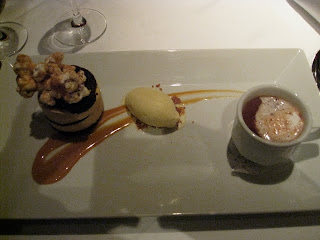 And here is my happy satisfied face as I savored each bite! 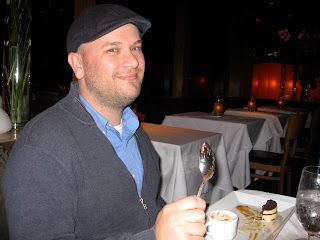 Now for the best part. The minute we were seated at the table I said to An and Shamoli, "I don't want to spoil the surprise, but at the end of the evening they are going to bring us a pastry for breakfast tomorrow!"
Then as each table finished their meal I made sure to point out to my friends, "Look! They just brought that table the pastries!"
This went on the whole evening.
We were the last party in the restaurant when the waiter brought our check. Then he said, "Now, normally we only give this breakfast pastry to our female guests, but I have brought one for you as well."
I could not contain myself. I said to the waiter, "You don't understand, the only reason I wanted to come tonight was to get this breakfast pastry. I would have been devastated if you didn't bring me one. You made a wise choice because I would have had to tell everyone on my blog if I didn't get one."
He smiled and laughed.
And let me just tell you, the next day, that banana cream cheese muffin was fantastic!
My final tale of 2009 is about Christmas with my parents. 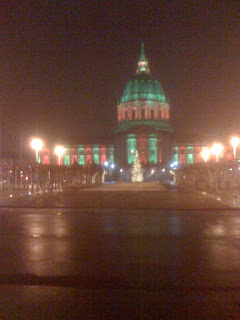 This year I invited my parents to join me in San Francisco for Christmas. I was very excited when I got the email saying that they had secured lodging for the dog and would be able to come. Now they would be able to see how beautiful the city is at Christmas time. (See the picture of City Hall above lit up green and red.)
My parents arrived on Christmas Eve and I surprised them by saying that I was going to cook dinner (with a little help from Mom.) This is a big deal because I don't cook and we usually eat every meal out when they visit.
Earlier in the day I went to Trader Joe's and planned out my meal.
Salami and cheese for appetizers followed by butternut squash soup, field greens salad, and pasta for dinner. Mom helped in my two foot by four foot kitchen. Who knew two people could work simultaneously in that small space!
Christmas day we walked to church. Yes, when my parents come I make them walk and take public transportation. One time on the bus this trip Dad got to sit next to the coach of USC's Water Polo team. It's never a dull moment on public transit. 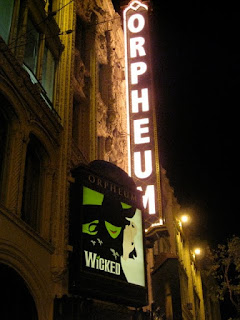 My second surprise for my parents was tickets to see the musical Wicked the day after Christmas. It is a really great show and if you have the chance to go see it I highly recommend it. 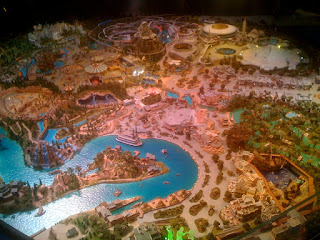 On Sunday after Church and brunch we went to the recently opened Walt Disney Family Museum at the Presidio.
From the size of the building I thought we would power through the museum in about an hour. I was wrong. I think it took us three hours to work our way through the 10 galleries.
The museum is an interactive experience that tells Walt Disney's story from birth to death.
My favorite part was the detailed model of "the Disneyland of Walt's Imagination" pictured above.
I enjoyed the museum but I think it is definitely more for adults than kids.
And now on to 2010...
The Song Of The Day - Live To Tell by Madonna
Posted by Just Jon at 6:22 PM