Have You Ever Really Loved A Woman . . . 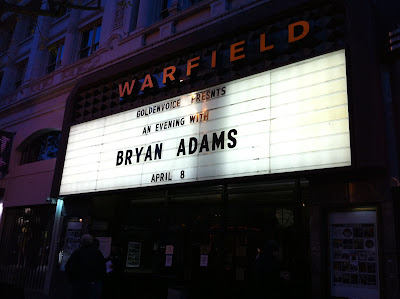 Last night my concert buddies Erin and Michelle had an extra ticket to the Bryan Adams concert in San Francisco which I had the extreme pleasure of taking off their hands. (Thank you Sean, Erin's husband, for choosing not to go.)
Last nights concert was part of The Bare Bones Tour which features Bryan accompanied only by a piano and his acoustic guitar.
While I am not familiar with all of Bryan's work, there were enough hits in his long career for me to sing along to most of the night.
Bryan seemed to really be enjoying himself on stage and often stopped between songs to tell stories to the audience.  I LOVE when artists do that.  I also love when you get to hear a song broken down to minimal instrumentation and it still moves you.
The only negative for the evening was that our orchestra left section seating seemed to be reserved for intoxicated people who may or may not have been drinking since 7am for the Giants season opener that happened earlier in the day.  I am pretty sure that our Canadian friend Mr. Adams could care less that the Giants won the game a few hours earlier and didn't need you to yell that out periodically during his show.
My apologies in advance for the below video which is a little shaky.  The theatre staff was very on top of people who tried to take pictures or video during the show.  Several announcements where made prior to entering the building that "The artist has requested no photos or video."  I got reprimanded the first time I pulled out my phone to snap a shot.  However, when Bryan started to play Have You Ever Really Loved A Woman I had to try and capture the moment for my Loyal Readers.
The whole show was really quite fantastic, and his accompanist was quite a skilled pianist who really worked it out!
The Song Of The Day - Have You Ever Really Loved A Woman by Bryan Adams
Posted by Just Jon at 3:28 PM