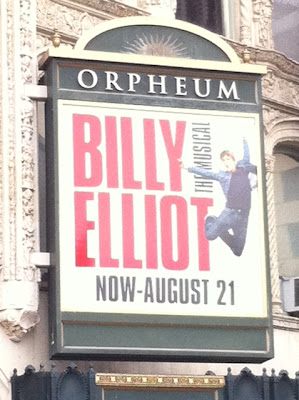 This week I saw the San Francisco production of The Musical Billy Elliot which is playing at the Orpheum Theatre through August 21.

I was a fan of the movie so I was intrigued to see what they would do with the story to turn it into a musical.

The show is about 2 1/2 hours long with one 15 minute intermission.

The show is enjoyable but because of the story line some of the songs are a little slow which makes the show seem a bit long.

Faith Prince as Mrs. Wilkinson, the dance teacher owns the stage and is a pleasure to watch.

Jacob Zelonsky as Michael, the young friend of Billy steals the show any time he is on stage.

I was most impressed with one scene when young Billy dances in sync with "Older Billy".  During this number young Billy is actually flown through the air.  It was a very touching moment in the show.

The curtain call was also the most fun I have ever scene a Company have while taking bows.

If you liked the movie, the Musical does a good job of recreating the story on stage, so be sure to check out the touring company of Billy Elliot if it comes to your City.

Tip - Before purchasing your tickets google the phrase "Coupon Codes For Billy Elliot" and you can fairly easily find a code that will get you tickets at a discounted price.

The Song Of The Day - C'mon Billy by PJ Harvey