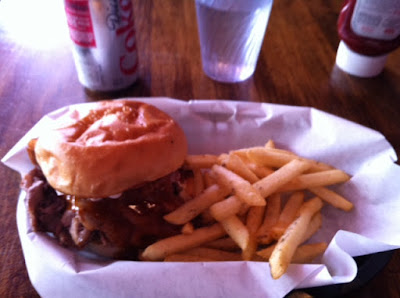 Back in March of this year I shared with you all that the last Arby's in the City of San Francisco had closed.

Apparently I was not the only person who was upset about this because I was inundated with emails from other fan's of Arby's who were devastated by the closure.  ( Slight exaggeration - I got two emails.)

The first email was from my friend An who let me know that if I would have just "googled" Arby's I would have seen that there was still a location in South San Francisco which was actually closer to were I live than The City location.

This new found information made my eulogy to the closed Arby's seem a little unnecessary.

Today, I finally made it across the City in search of The Sycamore, which is a dive bar in the heart of The Mission.  I followed the instructions on their web site that said if you want to order food proceed directly to the bar and place your order with the bartender.

I think I was the only person in the bar who ordered food with a diet Coke.

Ten minutes later an $8.00 carbon copy of Arby's roast beef sandwich was delivered to my table.

I could not believe how close it tastes to Arby's!

If you are in The Mission and jonesing for an Arby's roast beef sandwich be sure to check out The Sycamore.  When you place your order request it with both sauce and mayo for the ultimate non-Arby's Arby's experience!

The Song Of The Day -  Got 'Till It's Gone (Featuring Q-Tip and Joni Mitchell) by Janet Jackson
Posted by Just Jon at 10:11 PM