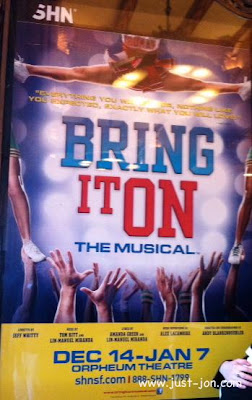 This week I went to see the musical Bring It On.

The musical is loosely based on the four movies in the Bring It On series.  (Yes, there are actually four Bring It On movies.)

One can't help but be impressed as the lead actress belts out a song while balancing on the shoulders of another actor.

I found myself watching for potential out of sync or misstepped stunts that can happen when performing cheer routines.  Every time the ensemble was performing a routine I had that uneasy pit in my stomach.  The same one I get while watching Olympic Ice Skating; because you never know when the routine could go terribly wrong.  The show appeared to be nearly flawless from what I could tell.

The story line had elements of all four movies but the main focus was on the captain of the Truman High School cheer leading squad getting transferred to an inner city school under questionable circumstances.  There was the battle of good and evil, revenge, self discovery, and true cheer bitchiness all embedded in this modern day musical.

Two characters however steal the show.

Bridget - the overweight nerd who finally is accepted and appreciated when she too gets transferred to the inner city school.  Bridget was played by Ryann Redmond.

And La Cienega - the transgender fierce diva from the inner city school as played by Gregory Haney.

These two actors lit up the stage every scene they were in.

I was also pleased to see that the character of Steven was played by Neil Haskell who was the second runner up on Season 3 of So You Think You Can Dance.  Neil was one of my favorite dancers that season so to get to see him dance live was exciting.

Here was Neil's battle for the championship dance "Two Princes" choreographed by Mia Michaels from Season 3 of So You Think You Can Dance:


Upon looking around the audience at Bring It On, it was clear to my friend Marilu and I that many of the theatre patrons, including ourselves, were current or former cheerleaders.

Because I still have no shame, why not rewind to 1990 and share a couple of photos of me in all my glory on the cheer leading squad. 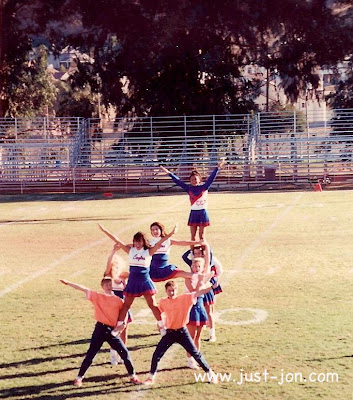 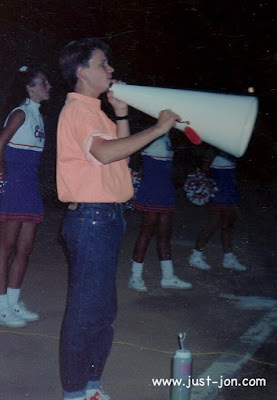 Wow, I look like I actually know what is going on in the game.  Impressive!

Bring It On was a really enjoyable musical with fantastic stunts that are not normally seen on the musical stage.  If you have the chance, be sure to check this musical out.