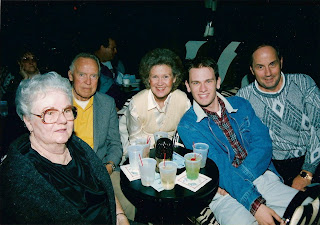 This past week my Grandfather passed away.  He was 90 years old.  I thought I would take a moment to share 1o things I will remember about Grandpa.
First of all I have to say, my brother and I, along with our younger cousins were lucky because we actually were allowed to call him "Grandpa."  My older cousins called him "Ray" because he didn't want to be thought of as old.
The above picture was taken in Jan 1997.  We were at the Riviera Hotel in Las Vegas.  It was my graduation from college trip and we had gone to see a celebrity impersonator show that night. Check out my full head of hair!
You can also see a great picture montage of my Grandfather's life set to music at Making Everlasting Memories (MEM).  Search for "Ray" "Collins".
So without further adieu I will share my "10 Things To Remember About Grandpa."
1.  When my Grandfather was still in good health,  without fail every time I saw him he would ask me, "How do you hold your pants up?"  At the time I very rarely wore a belt and he did not understand how my pants did not fall down.
2.  After the belt discussion, it was quickly followed by "Did you see Third Rock or Seinfeld?"  This was kind of a trick question because my grandfather would watch the syndicated versions of these shows at 6 or 7 at night and not the new episodes that were airing in prime time.  So I always would try to clarify what the episode was about so that we could have a laugh about whatever Kramer or Dick had done.
3.  My first electric razor was an old one I had seen in my Grandfather's dresser.  When I wanted to start shaving my "beard" we asked if I could have one of his old razors.  He cleaned it up for me and I was so excited.
4.  My Grandfather was skilled at splicing electrical cords together and fixing broken switches.  I think he fixed more than one of our hair dryers (back when I had hair) and a fan.
5.  My Grandfather took us out on the ocean and on the lake in his boat.  He always made us wear life jackets and I seem to remember we would sometimes have to switch where we were sitting on the boat to shift the balance.  I feel like the few times we went on the boat there was always a problem with launching the boat into the water, getting the boat back on the trailer, or the engine working properly.  But being under 10 years old at the time I didn't care because I was just so excited to be on the boat.
6.  My Grandpa always won at pool.  He had special rules and children were not allowed to play on the pool table.  It was only for adults.  I was lucky because when I was 8 years old my Aunt Ronda snuck me upstairs and let me play a game of pool.  We had to keep that a secret from Grandpa.  Later I did get to play Grandpa at pool and learn all about his game of choice "The One and the Fifteen."
7.  My Grandpa also liked to play Dominoes.  I know he had an intricate scoring system but I don't think I ever really understood that part.  I just liked matching the dots.
8.  My Grandpa had a sweet tooth.  He had a whole drawer of junk food in the kitchen that I think each of us grand kids discovered at some point and would eventually ask Grandma "Can I have a ____ from the drawer?"  His favorites included Orange Slices and Ding Dongs.    On the adult side he also liked warm beer.  Which to this day I have yet to try and still don't see the appeal of.
9.  My Grandpa taught my Mom, who then shared with us that you can try and get a stain out of your clothes by using the eraser on your pencil.  I am gonna be honest and tell you that it doesn't really work that good.
10.  After my Grandfather retired a couple of times we painted together.  He was much better than I was, but really neither of us were that good.  One of our really bad paintings we didn't even draw we just filled in the color on someone else's drawing.  Then he found this ratty old frame and he and I framed our work of art.  My Mom would hang our masterpiece above the fireplace when he was coming over to our house.  It was amazing! 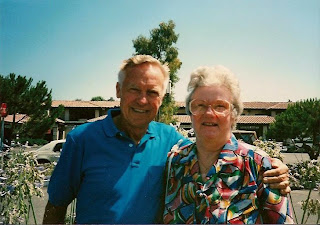 I took this picture in 1988.  I think it was a lunch in Westlake Village for my Grandmother's birthday.
The Song Of The Day -  Straight Up by Paula Abdul (Because Grandpa thought she was a good dancer.)
Posted by Just Jon at 8:34 PM

Email ThisBlogThis!Share to TwitterShare to FacebookShare to Pinterest
Tag: Family