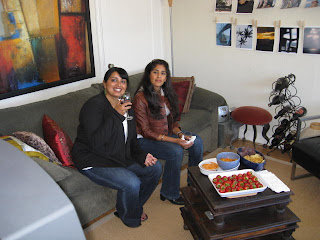 The first neighbor I met when I moved into my apartment building two and a half years ago said, "Oooooh, you have the best apartment in the whole building for watching Fleet Week and you can also go up on the roof for an even better view!"

I politely smiled and nodded my head but really had no idea what Fleet Week was and was also pretty sure the mammoth lease I had just signed specifically said we were not allowed on the roof.

A few months later I saw first hand what Fleet Week was all about and yes, I did have a pretty good view.

The following year I wanted to share the experience with my parents so I invited them up to see the amazing air show put on by the Blue Angels.  We even went up on the forbidden roof and joined all the other young party goers having a good time.

This year I decided to throw a wine party for Fleet Week and invite some friends over.  This would be my first official gathering of friends in my very small studio apartment.

(On a side note...I have been telling my friends that I would have a wine party for 13 months now.  In fact I even bought the wine glasses a year ago.  I think they were starting to give up hope as to whether this party would ever happen.  And really, I don't blame them.)

So this past week I sent out e-vites for my Fleet Week Wine Party! 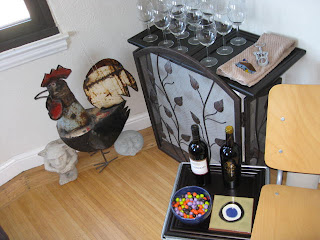 I hit up the local Trader Joe's (Shout out to my brother who is a Captain for Trader Joe's in Bellingham, WA) and with the help of a very kind worker I picked up a LOT of wine, chips, mango salsa, tomato hummus dip, strawberries and some more wine. 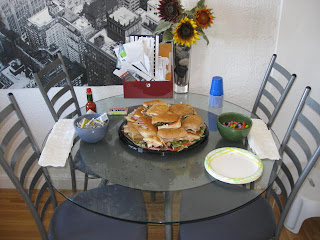 Then it was off to Subway where I picked up a platter of roast beef, turkey and ham subs. Because nothing says Wine Party like sub sandwiches, chips, and Peanut M&M's.  I know I know, wine parties are supposed to be about cheese and chocolate.  Well, there was cheese in the sandwich and chocolate in the M&M! 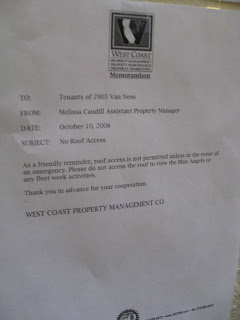 There was just one little flaw in the master plan.  Since my apartment is so small I had planned to move the party up to the roof if it felt to crowded.  But on Friday, the apartment managers put up notices that said the roof was off limits for Fleet Week.  Uh oh!

Well my guests and I decided we would stay in my apartment for the majority of the air show and then try and go on the roof for the last hour when the Blue Angels were performing.  This worked out great and there were other people on the roof too! 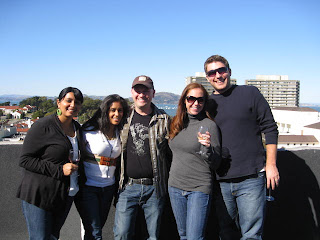 Thanks S, Shagun, Jen, Ryan and Sophia (who was taking this picture) for coming!