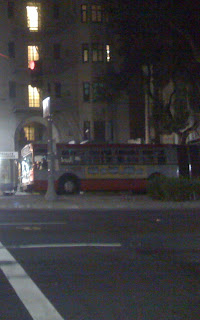 Bill O'Reilly recently did a piece on his show smearing the city of San Francisco.  Now if I was from middle America watching this "news" segment I would think San Francisco was a frightening out of control place with rampant drug use, lack of safety, and an out of control homeless problem.
Here's the thing, there is a bit of truth in the sensationalized version of San Francisco that Bill O'Reilly portrayed.  And as I road the bus last night I reflected on the O'Reilly segment.
One of the things mentioned in the segment is that the homeless are everywhere in San Francisco.  They are not limited to one area of the city.  And as mentioned in the piece, San Franciscans have learned to co-exist in harmony with the homeless.  "Harmony" might be defined by some as adjusting which side of the street you walk on to avoid the homeless, but it is still "harmony."
So last night I was riding the Muni bus home from a holiday party at around 1:30 am.  Every time I ride the bus late at night it is a new and unique experience.  I have listened in on a older homeless man's conversation about how in his youth he would hold up the bus drivers  and hijack the bus or rob all the passengers.  "Boy I could run back then," he said.  He seemed harmless now.
I have seen the after affects of someone getting sick on the bus late at night.
Once I sat in amazement as two homeless gentleman boarded the bus with their large backpacks and proceeded to sit in the row behind me.  The older one of the two pulled out a needle and proceeded shoot drugs into his arm while the bus barrelled down Van Ness Ave.
And yet here once again was an example of "harmony;"  "I won't bother you if you don't bother me."
So on the bus last night we seemed to be stuck at the bus stop for what seemed to be about ten minutes.  The delay was caused by a homeless man who was struggling to get his life possessions onto the bus.  The driver had to use the wheelchair lift to help the homeless man get his granny cart and milk crates up.  The homeless man's cart barely fit in the aisle.
There was another man on the bus whom I had already been watching while we waited at the stop for the bus to arrive.  He seemed antsy.  Not agitated, just antsy.  He then started telling those sitting nearest to him that he had just been released from jail after what he claimed was an unfair accusation of assault because he threw a paper cup with Coke in it at someone.  (The cup may have been thrown at a police officer, but I had my earphones in so I couldn't hear every word. )
Bottom line, this guy wanted to get home, and he wanted to get home NOW.  So needless to say he was less than pleased with the homeless man causing the ten minute delay.
Next came the "Only in San Francisco" moment.
After all the time spent loading his possessions onto the bus, the homeless man only rode about three stops before pulling the bell cord to indicate that he wanted to get off.
Well, jail release man was not about to wait another ten minutes for the driver to use the wheelchair lift to lower the homeless man's possessions back off the bus.  So jail release man took it upon himself to pick up the homeless man's stuff and expedite the process of "disembarking" the bus.
This was all fine by me because I wanted to get home too.
So it looked like everything was all off the bus but we still hadn't pulled away from the stop.  I then saw that the homeless man was now standing at the front of the bus.  He began to proclaim the following all while clapping:
"Let's all give this man (jail man) a warm welcome home.  He just got out of jail after being accused of assault for throwing a paper cup with Coke at someone.  Welcome home!"
No one else on the bus joined in on the clapping.  And like Bill O'Reilly's piece, only in San Francisco, harmony.
The Song Of The Day - Crazy by Gnarls Barkley
Posted by Just Jon at 9:37 PM