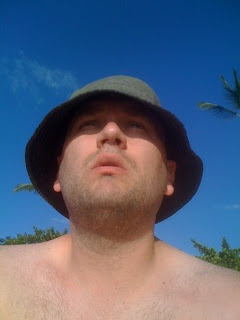 Monday I didn't have anything planned. I went back to the town of Lahaina to stop at one of those infamous activity booths so that I could discuss booking what activities I wanted to do for the rest of the week.
After a very expensive breakfast that included a $9.00 cup of coffee, I plotted out the rest of my week.
Monday was going to be a free day and I would spend the afternoon soaking up the sun on beach at the resort.
Loyal Readers who are also on Facebook know why I took the above picture. As I was walking around the town of Lahaina on three separate occasions in two days I had people come up and offer me marijuana.
I should have responded with, "Umm, hello, my hotel is totally non-smoking!" I don't think they would have seen the humor in that though.
My joke on Facebook was, "Apparently Stocky Bald White Guy translates to "Pot Head" in Hawaii."
I took the above picture as photographic evidence that maybe the bucket hat and Crocs I was wearing caused the locals to profile me as a "Pot Head."
One conspiracy theorist stated that they thought it was undercover police officers trying to catch tourists buying drugs. I doubt it.
After my day of soaking up the sun I had dinner and then once again drove back to Lahaina to go to Maria Lanakila Catholic Church.
The church was having a prayer service from 7 to 9 PM in thanksgiving to God for the gift of newly canonized Saint Damien of Molokai. The prayer service would include the presence of the reliquary bearing a bone fragment of Saint Damien which was making its way from Rome back to the Cathedral in Honolulu.
I misunderstood the bulletin and thought it was going to be an open adoration from 7 to 9 PM and didn't realize it was a prayer service starting at 7 PM. I arrived about twenty minutes into the service but just in time to line up to take a turn placing my hand on the reliquary to say a prayer to Saint Damien. This whole process was very regimented by the Knights of Columbus in full dress.
After the service they handed everyone a metal with Saint Damien on one side and an image of Maria Lanakila church on the other side.
On my way back to the resort I stopped off at Barnes And Noble Bookseller for a frappuccino and picked up a copy of "Holy Man - Father Damien Of Molokai" by Gavan Daws to learn more about the man who ministered to the lepers in Kalawao.
The Song Of The Day - Pass That Dutch (Amended Version) by Missy Elliot

Email ThisBlogThis!Share to TwitterShare to FacebookShare to Pinterest
Tag: Hawaii