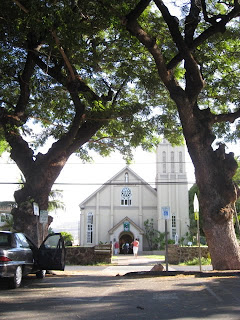 Sunday morning I was off to an early start as I headed into the town of Lahaina for 8:30 AM mass at Maria Lanakila Catholic Church. It was 80 degrees and no air conditioning, just a bunch of open windows and some ceiling fans. Mass ran long as I think the priest wanted to make a connection with each person that he gave communion to.
After church I set out to explore the town of Lahaina. I soon came upon the famous Banyan tree. The tree is located behind the old court house and takes up almost the entire park! 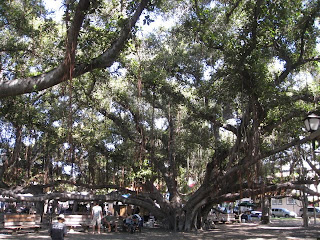 After spending some time at the Banyan Tree, I continued to explore Front Street along the water. It was here that I saw this old sunken boat in the ocean. 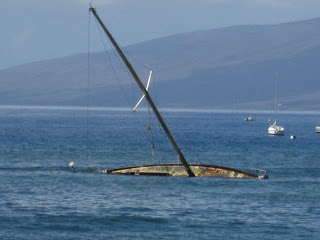 After strolling up and down Front Street I finally decided on a place to eat and had a delicious breakfast burrito with tropical salsa. 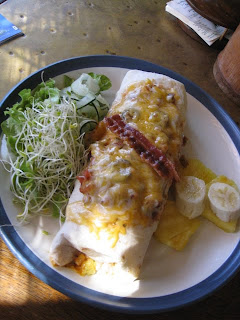 Refreshed from my meal, I decided to drive across the Island to the town of Wailea because I knew there used to be a Gap there.
Yes, I needed to continue my Shopping Mall Tour Of America and find the Shops At Wailea.
I found the mall and had a good chuckle when I discovered that the only Gap on Maui was a women's only store. As I stood in the store for several minutes I reflected on the fact that it was full of winter sweaters and puffy vests and it was 87 degrees and humid outside!
Awesome!
After exploring the rest of the mall I headed back to the resort.
I decided I would buy a ticket for the hotel's on site Luau for the evening. 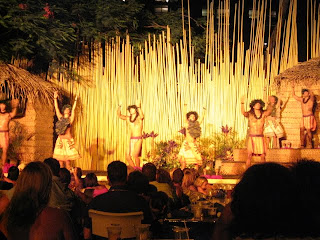 The Luau was an all you can eat buffet with traditional Island fare and delicacies. It was also an open bar with standard cocktails, beer, wine, sodas and fruit punch.
After dinner The Myths of Maui show began with singing and dancing. The evening culminated with a Fire Dance Finale.
I was seated at a long table with a woman named Toni who had nothing positive to say about this Luau experience. It was NOT up to her expectations.
Frankly, I thought it was fine. I wasn't expecting much from a Luau at the hotel that is put on nightly. It was exactly what I thought it would be.
Toni was also willing to share her thoughts on everything! The town of Oxnard, where she and her husband own a condo, religion, TV weatherman, The Gap, local tours on Maui, airlines, and probably more things that I have already forgotten about. Thank God the show started or I think she would still be talking to me.
After the Luau it was time for bed.
The Song Of The Day - Sunday Morning by No Doubt
Posted by Just Jon at 7:54 PM

Email ThisBlogThis!Share to TwitterShare to FacebookShare to Pinterest
Tag: Hawaii