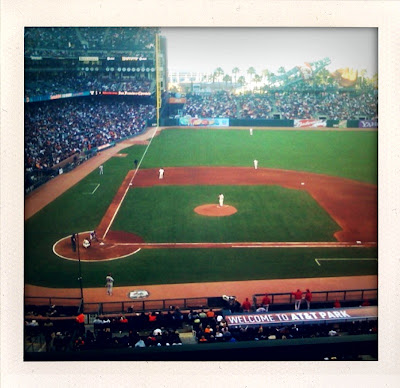 Are you ready for some baseball?
One of my co-workers secured our corporate luxury suite for the Saturday evening Giants game against the Arizona Diamond Backs.
It was really nice to be on the suite level at AT&T park.
First, you have the option of sitting inside the suite on comfortable couches and chairs or outside on the standard stadium seats.
Second, the suite is right along the first base line. Great view!
Third, we were able to turn on the suites' flat screen TVs to the Lakers game. (This proved to be very confusing for me. Every time my suite mates would start cheering for the Lakers game, I thought I had missed an amazing play by the Giants on the field below.)
Fourth, the bathrooms on the suite level are pretty fantastic and there is no line!
It turned out to be a great game. The Giants won 12 to 1! And, it was give away "hat" night! 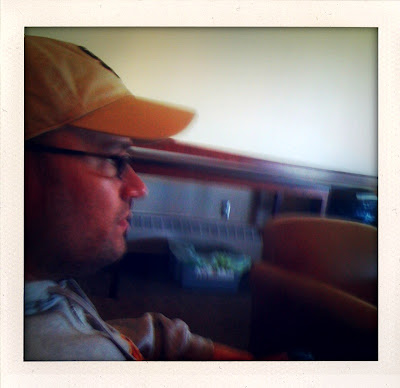 All that being said, what I really want to talk about is effective protesting.
When I arrived at the ballpark there was a substantial protest taking place. I started racking my brain trying to figure out what the protest might be about.
I came up with nothing. 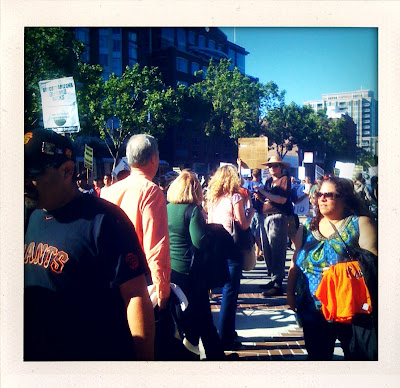 As I got close enough to read the protest signs it was clear that they were protesting the State of Arizona's immigration laws. The Giants were playing the Arizona Diamond Backs after all.
So I started to reflect on whether this was an effective protest or not.
Yes, it definitely would get a lot of attention from the crowds of people trying to get into the stadium. But what about the people driving by in cars or passing on the Muni trains?
Those people would not be able to read the signs and would question just like I did, why are they protesting the Giants?
This reminded me of another protest several years ago.
I was working in Santa Barbara.
Over the years The Gap, Inc. was subject to several organized protests. Since the mall where I worked was private property, any protests of The Gap would have to take place on the public sidewalk. Essentially that meant that the protesters were not standing in front of the business that they were actually protesting against.
My favorite example of this ineffective protest was when the protesters stapled big blue Gap shopping bags to their yard sticks. Gap Inc. is the owner of Banana Republic which was on the main street and had public sidewalks in front of the store. The protesters positioned themselves in front of the Banana Republic.
Confusion ensued as the protesters hoisted their big blue anti Gap shopping bag signs while chanting "Si Se Puede" (Yes, It can be done) in front of the Banana Republic.
First, not every one is aware that The Gap owns Banana Republic. So holding up anti Gap signs in front of Banana Republic didn't make a whole lot of sense to the average shopper.
Second, chanting "Si Se Puede" in front of a store whose clientele for that market was upper middle class white women that don't speak Spanish, resulted in the protesters' message being lost.
Back to the Giants game.
One of the people who attended that game with me happened to be raised in Arizona. She said that the immigration law has had a negative impact on the Arizona economy because people are refusing to travel to the State of Arizona as a sign of protest.
So if Arizona's immigration law is negatively impacting an already depressed economy, would the protesters at this Giants game want to negatively impact revenues being generated in our City for something happening in another State?
I am not sure I have the answer for that, but it is definitely food for thought.
I think I will go grab a hot dog!
The Song Of The Day - Winner Of The Game by David Guetta featuring JD Davis
Posted by Just Jon at 11:26 AM