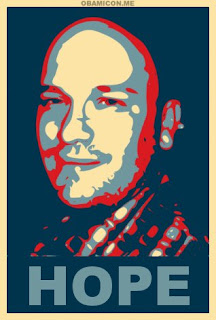 When President Obama was running for office in 2008 there was a web site that allowed you to upload your picture and turn it into a version of the Obama "Hope" campaign poster.
My Obamicon is shown above.
On Sunday Morning while I was getting dressed for Church there was the familiar thundering sound of a low flying helicopter. This is a sound that I had become familiar with as a child when police helicopters would circle above our house at night shining their search light into our back yard looking for "bad" guys. It's a very unsettling sound.
I peered out the window and watched as two low flying military helicopters circled the Bay. Usually, this is a sight reserved for the Fleet Week Air Show in October. I knew something must be going on when the two helicopters slowly descended onto the Marina Green for a landing.
Was Speaker of the House Nancy Pelosi in town? This seemed like a bit much just for her.
When I arrived at church I saw what has now become a familiar sight. Secret Service vehicles and men in blazers with ear pieces standing on the steps out front. Nancy was in town and I guess she would be joining me at mass.
This time Nancy didn't sit in the same pew as me so I didn't get to offer her the sign of peace. However, on numerous other occasions she has sat right next to me.
In my mind I was still connecting the helicopters to Nancy being in town.
On Tuesday after work I learned from a friend's facebook status update that President Obama had come to San Francisco to participate in a $17,600 a person fundraising dinner for Senator Barbara Boxer. (Yes, that says seventeen thousand six hundred dollars a person!) The event raised $1.7 million in one night!
As I watched the late evening news I learned that President Obama would be flying from San Francisco to Fremont on Wednesday morning to tour a solar energy firms plant that had received government stimulus money.
Now it all made sense. The helicopters from Sunday morning had been practicing their landing on the Marina Green where they would pick up the President for his flight to Fremont. Sure enough on Wednesday morning as I got ready for work the helicopters where back making their slow descent onto the large grassy field.
I left for work and was riding the bus toward the underground Muni station when suddenly traffic came to a stand still. After sitting on the bus for several minutes I realized that I was only two blocks from the Muni station and I could probably walk there faster than waiting for the traffic to clear.
As myself and several other people exited the bus and began walking down the street we were greeted by a police officer who told us we had to stay on the sidewalk because the President's motorcade was coming.
One woman tried to reason with the officer stating that she was late for work. The officer replied, "Mam, you have a great excuse today. How many people can say they were late for work because they were stopped by the President?"
He had a point.
I stood on the corner and pulled my camera out of my bag. I thought I would try and capture the moment on film.
So here is the thing that is typical Just Jon. As with other events, sometimes when trying to take a picture or film something, I am so busy futzing around with the camera that I actually miss the event.
It was starting to get exciting as police motorcycles with sirens blaring whizzed by.
"Here he comes!" shouted the officer in front of us.
Down the street I could see the Presidential limousine. There were two of them.
Still holding my camera up, I realized it was all happening too fast and I should just put the camera down.
Then, as I started to lower the camera the second limousine was passing in front of me.
Clear as day, was President Barack Obama looking right at the group of us standing on the corner. He was smiling and waving.
Less than two seconds later he was gone.
As quickly as it all began the street was opened back up and everyone was on their way.
So I am fully aware in the below video that I shot you can't see President Barack Obama. Please know that I tried to capture the moment for you Loyal Readers, and he really really was looking right at me. You will just have to take my word for it!
The Song Of The Day - Just Wave Hello (Ford Global Anthem) by Charlotte Church
Posted by Just Jon at 10:22 PM