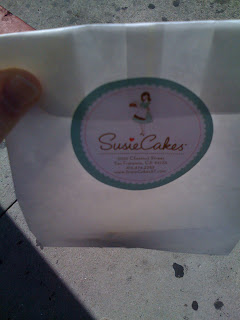 In Sunday's blog post I told you about the new cupcake store Susie Cakes. I ended that post by saying that I may have to go back for more cupcakes on Monday. 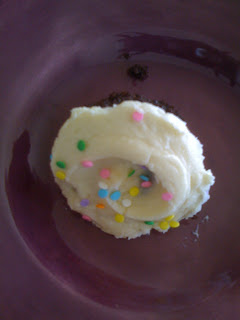 All I could think about Monday was getting home so that I could go to Susie Cakes and purchase another cupcake. After a long day at work I finally reached Chestnut Street and was devastated when I walked up to Susie Cakes store front only to discover that they are closed on Mondays.
I got over my devastation pretty quickly when I just walked over to one of the other three cupcake stores in the neighborhood to satisfy my fix.
On Tuesday I was picking up my dinner and once again found myself in front of Susie Cakes.
"I should definitely go in," I thought to myself.
(That didn't take much convincing.)
Susie Cakes also sells whole and single slices of cake. So this time I decided to try a slice of marble cake.
When I got to the register the cashier handed me my slice of cake and said, "Here is a free cupcake too."
FREE CUPCAKE! Shut the front door!
I happily made my way home eagerly anticipating the delicious marble cake.
By the time I finished the slice of cake I had a sugar headache and was sick to my stomach. I vowed never to eat a piece of cake again. It was too rich. It was too sweet.
Why didn't I just stop eating when I had the chance?
Like that would have ever happened.
I took the "FREE" cupcake to work the next day to share with a co-worker who has as big of a sweet tooth as me. She said she would save the cupcake until after lunch.
After lunch we were walking down the street back to the office we saw a van parked on the corner handing out FREE CUPCAKES!
Yes, my new nemesis Susie Cakes had followed me to my place of employment to tempt me with her tasty treats.
Despite having vowed just twelve hours earlier never to eat a piece of cake again, I accepted the FREE CUPCAKE with open hands and drooling mouth.
That leads to tonight, when I stopped by my good friend Susie Cakes to say hello.
I was just window shopping when I heard the words come out of my mouth, "I'd like the peanut butter cupcake please."
Damn you Susie Cakes!
At which point the cashier leaned in and said, "Here are some cookies for you to try too!"
I haven't had this much food guilt since the first time I went to Krispy Kreme and found out you get a free donut just for walking in the store.
By the time I got home my guilt had reached an all time high.
I knew there was only one thing to do.
I needed to talk to my personal trainer. . . 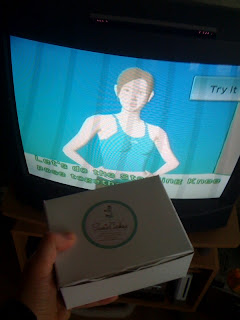 I powered up the WII Fit and winced when I stepped on the balance board and heard the TV say "Ouch!"
Then I made a peace offering in the form of a Susie Cake Cupcake to my WII Fit trainer.
She was having nothing of it.
"Let's do the standing knee pose," was all she could say.
OK OK I get it! No more cupcakes!
My trainer is so mean!
The Song Of The Day - Sweet Surrender by Sarah McLachlan
Posted by Just Jon at 11:41 PM