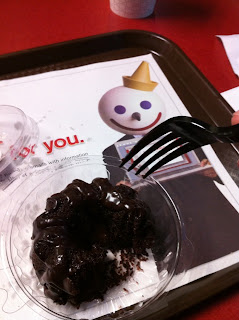 It has been brought to my sweet tooth's attention that Jack In The Box has updated its dessert menu to now include the "Chocolate Overload Cake."

This means I need to update Jack In The Box's standing on the Just Jon Fast Food Dessert Ranking chart.

As previously reviewed in April 2009, the Double Fudge Cake that used to be on Jack In The Box's menu paled in comparison to the Chocolate Cake with Cream Cheese frosting from Carl's Jr.  What I failed to include on that blog review was the Chocolate Bundt Cake from Quiznos.

In order from best to worst they would have been:

However, now that Jack In The Box has introduced the Chocolate Overload Cake, they have risen in rank.  They are now tied for second with Quiznos.

The two cakes are very similar.  In fact they may be the exact same thing.   The only difference in the cakes is that Jack In The Box's appears more moist.  This might be because I don't think it came straight from the freezer like the Quiznos cake (allegedly).

Congratulations on elevating your game Jack In The Box!

The Song Of The Day - Kandi (Eat More Cake Mix) by One Eskimo
Posted by Just Jon at 6:07 PM