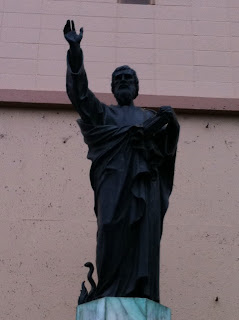 Have you ever heard the phrase, "Church is not a building; it is people."?

Well I think I have found this to be true of the church in my new neighborhood.

I have never experienced a Catholic church as welcoming as the one in this community.

My first experience at St. Paul of the Shipwreck was several months before I moved into the neighborhood when I was still "checking" things out. I stopped by to see if it was a Catholic church and to see what the mass schedule was.

Out front I met a man sweeping the sidewalk. I introduced myself and he offered to open up the church so that I could see inside and pray if I wanted to.

I was pleasantly surprised by the multicultural representation of Jesus hanging above the altar.  It beautifully represents the community at large.

As i was leaving the man said that he hoped to see me again.

I was 30 minutes late because I forgot what time mass started.

At the Sign Of Peace the entire community stepped out into the aisles and shook hands, hugged, and kissed.

The man whom I had met a couple months back was coming down the aisle and he beamed with delight when his eyes landed on me.

One women held my hand and said, "It's your first time isn't it?"

She replied with warmth, "Well, welcome!"

At the end of mass the priest asked if there were any birthdays being celebrated.  When no one responded he started the closing prayer.  A woman yelled out, "Father, we have someone new with us," as she turned and pointed at me.

The priest stopped the closing prayer and asked me to introduce myself to the congregation.

When I said I had just moved to the neighborhood they all smiled.

Last week I missed mass because I was not feeling well.

This week at the Sign Of Peace the priest grabbed my hand and said, "Peace be with you Jon."

Now I have a terrible time remembering people's names, yet after only meeting me once he was able to address me by my name.  I was impressed.

I was impressed that is until after mass when I was leaving the Priest saw me and said, "We haven't seen you in a couple weeks.  Nice to have you back."

Out loud I said, "Oh yes, I wasn't feeling well last week, so I missed mass."

Really!  I only missed one week and I was sick.

I guess I won't be able to miss mass anymore or the Catholic guilt will really get to me since the priest will notice that I am not there.

The Song Of The Day - He Calls Us Each By Name by Santa Sophia Catholic Church
Posted by Just Jon at 7:09 PM

Email ThisBlogThis!Share to TwitterShare to FacebookShare to Pinterest
Tag: Church