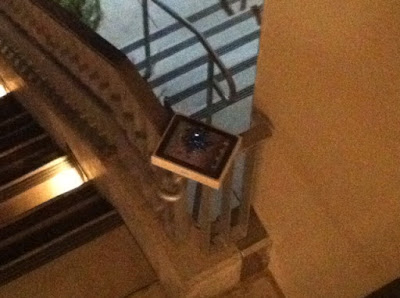 This is the tale of the modern day Christmas Miracle.

On Christmas Eve my parents and I returned home after a long day of shopping.

Mom was boiling water on the stove for pasta and super excited to try the "Power Boil" feature on the range top.

Dad was sipping Dewar's White Label Scotch on the couch and I said I was going to run downstairs and get the mail.

On my way back into the building I spied a brand new unwrapped iPad 3G sitting on the staircase outside.

There was no tag on the iPad.

Oh Santa, you do exist and you brought me another better iPad than the one I already have.   You left it here on the staircase for me to find.  I knew you were real!

Then I snapped back to reality.   Sort of.

At first I was going to bring the iPad inside because I figured someone had accidentally left it outside.

Then I thought that maybe one of my neighbors who was having a gathering that night had purposely put the iPad on the staircase and it was part of an elaborate gift scavenger hunt.

Yes, that was definitely it, if I took the iPad inside it would ruin the whole Christmas Eve scavenger hunt for everyone.

I couldn't free my mind of the iPad.  So every few hours I would go back and check if it was still there.

Nightfall came and the party guests were leaving one by one and the iPad still sat on the stair case.  Now I figured that the party was so good that the guests must have had too much to drink and had totally forgotten to open the gifts which included the iPad.

First thing in the morning I went downstairs; saw that the iPad was still there and grabbed it.

I placed a note in the parking garage that said "If you lost an unwrapped Christmas gift with a bow on top, I found it outside on Christmas Eve.   Call me."

The hours ticked by Christmas day and the phone never rang.

By 9pm I was pretty sure I had just inherited an iPad 3G.

Then I looked over at my phone and saw one missed call from a number I did not recognize.

I listened to the voice mail and it was a gentleman who was hoping that the gift I found was an iPad.

I called him back and told him that it indeed was an iPad and that he could come over and pick it up.

So a little more than 24 hours after iPad 3G entered my life it was gone!  Gone that is to make someone else's Christmas just a little bit better!

The Song Of The Day - Lost Ones by Lauryn Hill
Posted by Just Jon at 10:15 PM

Email ThisBlogThis!Share to TwitterShare to FacebookShare to Pinterest
Tag: Condos