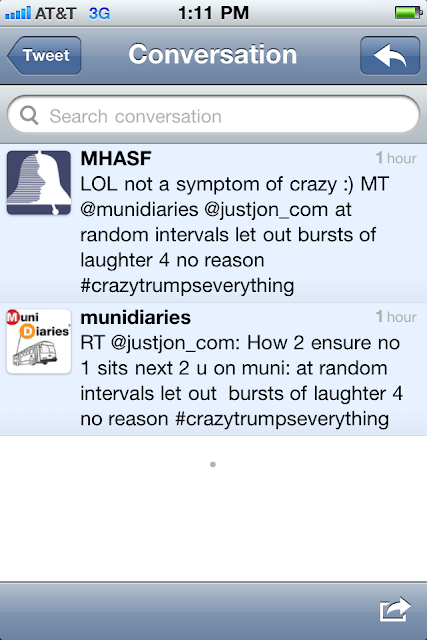 Believe it or not, since the great vast Internet is a public place sometimes people outside our humble little group read my posts and tweets and watch my YouTube videos.

The written word is a powerful medium and sometimes I worry that my opinions and statements on this blog may get me in trouble.  Like the time I received an email from a ballerina who had read my review of the San Francisco Ballet's production of The Little Mermaid.  Fortunately, she saw the humor in my post and actually linked it to her site.

Earlier this week I once again found myself questioning my words.  My friends and I have a saying at work, "Crazy Trumps Everything."  The intention behind the statement is that if you are ever in a situation where you need to protect yourself, just start acting crazy.  Why?  Think about it.  If you see someone with turrets syndrome cussing up a storm at no one or jumping around in a public place, don't you step away?  The theory seems pretty solid.

So on Friday, I made an observation on Twitter about riding public transit.  A gentleman who may or may not have been shelter challenged had an empty seat next to him the entire 30 minute ride into the Financial District.  He was fairly clean and the only thing that stood out was that every few minutes he would let out a big burst of laughter.  He wasn't on the phone or talking to anyone.  I think the random bursts of laughter on a Muni Train kept other passengers at bay.

So I tweeted the following statement, "How 2 ensure no 1 sits next 2 u on muni:  at random intervals let out bursts of laughter 4 no reason #crazytrumpseverything."

I hash tagged it "crazy trumps everything" because I thought the situation reinforced our theory at work.

Well, my tweet was read by the web site munidiaries.com and re-tweeted to their followers.

I always love when I get re-tweeted.  I look at it as a validation of my attempt at being funny.

Then I got a reply to my tweet from MHASF.

MHASF?  Wonder who that is.

MHASF wanted to let me know that "Laughter" is not a sign of being crazy.

And to make me feel even worse; May is Mental Health Month.

Fortunately, MHASF had a sense of humor about my tweet because they added LOL and a smiley face to their tweet reply.

But it does make me stop and think about the power of words and the Internet.  It is never my intention to offend anyone with this blog.

I hope everyone shares a laugh this holiday weekend because laughter does make the world a better place.  If you are feeling burdened by a mental health condition please visit MHASF's website for additional support.

The Song Of The Day - Crazy by Gnarls Barkley
Posted by Just Jon at 11:45 AM