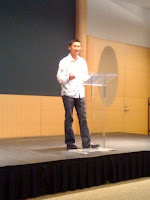 Did you know that May is Asian-Pacific American Heritage Month?
Today I had the privilege of attending the final event in a month long celebration of diversity at my office.  This Speaker Event held in our conference center featured a South Asian Dance performance of Bollywood and Bhangra dance styles, a speech by our CFO, and special guest speaker Yul Kwon, the winner of the reality television show Survivor, Cook Islands.
I love that I work for a Company that celebrates diversity.  It was so great to see two of my peers perform a dance routine in traditional Indian clothing as the room cheered them on.
I also enjoyed Yul's speech that shared his own personal journey of not having an Asian role model on television while growing up.  He shared how his controversial season of Survivor was cast with the intention of putting racial stereotypes on the show.  He also talked about a study of how Asian Americans hit a glass ceiling when climbing the corporate ladder.  This is often a result of the cultural differences in how they are raised.
In the American corporate world, in order to move ahead you must have a clear point of view and ensure that your point is heard in group meetings.  Yul explained that in the Asian community they are taught to be respectful of their superiors.  They are also taught to never look a superior in the eye out of respect and also to wait until everyone else has spoken before they speak.  In times of stress, how a person reacts in a situation can be directly linked to their cultural upbringing.  So what the studies have shown is that despite being equally qualified for senior management positions in the American corporate world, the Asian Americans can be passed over because the perception is that they are too quiet or not confident and aggressive enough to be promoted.
I think Yul gave a great speech.  I think he is really accomplishing what he set out to do, to be a positive role model in the Asian American community.
After Yul's speech there was time for a few questions.  What happened next was very funny.  Yul had just finished his motivational speech about not being afraid to take risks, always share your opinions in the work place and stand tall.  Two people raised their hands to ask a question:  1.  the white acting president of one of our brands, and 2.  a twenty something Asian employee.  As Yul motioned for the young Asian employee to ask his question, the employee quietly looked down and said "Oh no, he can go first" pointing to the acting president.  Without skipping a beat he said, "No, you speak."  The whole room burst out laughing as we had all just witnessed what Yul had described in the study about Asian Americans in the corporate workplace.
The Song Of The Day - Pocketful Of Sunshine by Natasha Bedingfield
Posted by Just Jon at 7:03 PM