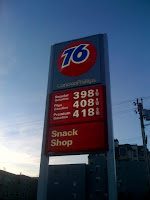 I was born and raised in Southern California.  Southern California is a car culture.  Having a car means having freedom.  It makes things accessible.  Your car defines who you are.  I found it hard to imagine what life would be like without a car.
Moving to San Francisco almost two years ago changed my whole reality.  I now had to worry about my car.  Would I be able to find parking near my apartment?  Would I be able to find parking if I met a friend for dinner?  Did I have enough cash to pay for the parking?  How long would it take me to find parking?  These were all questions I did not really have to worry about in Southern California.  Suddenly now having a car was becoming a burden.
In Southern California if you get lost driving you can pull off the street into a mall parking lot, a Target, or a gas station to figure out where you are.  In San Francisco there really is no where to pull off; you just have to keep going.
Before moving I had never depended on public transportation.  Now I had to figure out which bus would get me the closest to my destination.  Now I had to add travel time that was non existent before.  Now I had to remember my bus pass.  Now I had to figure out how to balance standing up on a moving vehicle.
I think the biggest adjustment to moving to the city was breaking the dependency on my car.  I had to figure out a new routine for life.  I could no longer just hop in the car without first thinking about the ramifications of that choice.  If I drove to a friends house for the day and arrived back in the city after 9 pm; it might take me up to an hour and a half to find a parking space.  Sometimes I think maybe I don't want to go to the event because I don't want to deal with the parking.
I can say I am now comfortable with my new life, but it took a good year to get to that place.  I find it interesting that I think about things very different.  In Southern California, if there was a measure on the ballot to raise a tax or have a bond for public transportation I would always vote "no."   Why should I give my money for something I don't use?  In this past election I found myself becoming very passionate about voting yes on anything that would improve public transportation.  What a difference!
I also look at the rising cost of gas.  We have broken the four dollar mark.  I think about how I can travel all over the city with my bus pass for just $45 dollars a month.  If I was still living in Southern California I don't think I would have been able to maintain the lifestyle I was living with the price of gas today.  Back then I drove on average 336 miles a week.  At the time I was filling my gas tank twice a week.  That is an incredible expense to incur.  Now, living in the city, I haven't filled up my gas tank in two months!  How crazy is that?
The Song Of The Day:  Walk Like An Egyptian by The Puppini Sisters
Posted by Just Jon at 11:04 PM