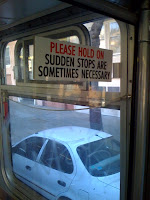 I think one of the requirements for being a Muni driver in San Francisco is to be heavy footed when accelerating and braking.  There are lots of signs posted inside the Muni buses, but the most important one is shown here.  "Please Hold On Sudden Stops Are Sometimes Necessary," and they are not kidding!
I ride the 30x bus every morning to work.  The 30x bus is what is called an "express" bus.  This means it has limited stops and does not follow the same route as the regular 30 line.  The 30x is primarily ridden by young business people traveling from the Marina District to the Financial District.  Most riders are dressed in fancy suits or business casual.  I feel I am usually the one oddball wearing a baseball cap, or bright green Converse, or even once on Halloween a wig.  The wig was a critical fashion faux pas in Marina etiquette.  Please read the article about Marina people I have attached as a link here to understand more about the stigma of being a Marina resident.
http://www.sfweekly.com/2001-01-24/news/forgive-me-for-i-live-in-the-marina/
So the stop where I get on the 30x is the last stop in the residential area before the bus heads downtown.  By the time the 30x reaches my stop the bus is usually full and most often will pass by those of us waiting on the corner without stopping.  Sometimes up to three or four full buses will pass by before one stops.  The problem is that even if the bus does stop, the chance of getting on is slim to none because the buses are so full.
So 30x riders have developed their own unspoken set of rules that does not apply in any other part of the city.  Because they are all young upwardly mobile business people (ex- fraternity/sorority members) they do not have to leave an empty seat space between each rider.  What I mean by that is there is little to no fear that a homeless person will get on the bus and sit next to you causing your ride to work to be rather unpleasant.  In fact everyone on the 30x is very well groomed.  Because of the exemplary grooming habits of your fellow 30x riders we are willing to pack as many people on the bus as possible.  Despite numerous signs that say not to stand beyond the yellow line or in the stairwells,  we 30x riders will break all these rules while listening to our iPods, texting on our Blackberrys, holding our Venti non fat latte in one hand, and holding the hand rail with the other.  I also forgot to mention that each rider is also usually carrying at least one briefcase and a gym bag.  Yes, we are the fine, the few, the elite, we are the Marina residents.
So the drivers ability to slow the vehicle down becomes an issue for Marina residents as they try and balance on their high heals without falling over or spilling their Starbucks.  I actually think the drivers find it amusing to watch the passengers hold on for dear life as they slam on the brakes.  I, who am not the most coordinated person on the planet, just about did a face plant into another riders crotch when the driver brought the bus to a sudden stop.  Good times.
I had never ridden public transportation before moving to San Francisco and I think part of the reason I have adapted so well to it is that it kind of reminds me of a thrill ride at an amusement park.  You never know how you are going to get tossed around.  I think of my morning commute as more than just a commute, it's an adventure.  I have ridden the 30x with my face pressed against the front windshield of the bus while holding on to the fare box.  I have also ridden the 30x in the back stairwell clenching the rail hoping not to fall through the doors as we took a sharp turn.
My all time favorite 30x moment was when an out of town tourist accidentally boarded the 30x instead of the regular 30 bus line.  The tourist and his wife followed the crowd and crammed themselves into the back stairwell of the bus.  As the bus pulled away from the corner and turned right, the tourists realized they were heading in the opposite direction from where they wanted to go.  The gentleman began to have a mild panic attack.  I was standing closest to the male tourist.  We were both leaning against the back door and I knew that if he freaked out and pushed on the door hard enough it might pop open while the bus was in motion.  I also knew it was going to be a good ten minutes before we reached the next stop.  I started talking to the man telling him where we were, where we were heading, and that when we reached the next stop enough people would get off of the bus that it wouldn't be so crowded.  His wife was telling him it would be ok too.  He calmed down enough to make it to the first stop, and just as I promised enough people got off for him to have more space to breathe.  They ended up riding the bus almost to the end of the line.  Another rider and myself told the tourists how close they were going to be to the destination they originally wanted to go to.  When he got off he thanked me for helping him on his first public transportation experience.
I am sure I will have many more stories to share in the future about the 30x.
The Song Of The Day - Time To Pretend by MGMT
Posted by Just Jon at 9:50 PM