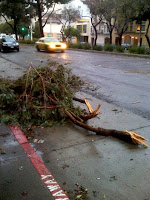 When Muni attacks!  Tonight I had the thrilling experience of riding the 1 California home.  As most people know, San Francisco is famous for historic bridges, fog, beautiful views, and steep hills.
The 1 California travels from the Financial District on the Bay all the way out to Lincoln Park which backs up to the Pacific Ocean.  As the Bus travels along Sacramento Street it slowly climbs a steep hill as it passes the Transamerica Pyramid, China Town and Grace Cathedral.
If you have ever driven on a steep hill and had to stop at a stop light you know that unnerving feeling when the car starts to roll backwards as you take your foot off the brake and press down on the accelerator.  Often times this results in the driver aggressively pressing down on the accelerator to prevent rolling into the car behind them.  This then causes the driver's car to peel out.
So now imagine what it feels like when you are the passenger on a massive municipal city bus.  I for one always get a little nervous when the bus has to stop on the way up a steep hill.  You can call it my lack of faith in the bus' braking system.
Here is the other part of my concern, since most of San Francisco's buses are powered by the electrical wires that criss cross above the city streets, what happens when the bus inadvertently gets disconnected from the wires?  From my experience the bus almost immediately comes to a stop, the lights on the bus go out, and the driver moves very quickly to get the rods reconnected.
Just how long could the bus continue moving if the driver did not reconnect to the wires.   For example, if Sandra Bullock and Keanu Reeves had to keep the bus going above 30 miles an hour or a bomb will go off, how long do I have to live if that bus broke free from the wires?  It could happen...right?
Anyway, I digress.  So here I am on the 1 California at the highest part of a steep hill when the bus became separated from the wires.  We lurched backwards as the driver quickly engaged the brakes.  He then exited the bus to try and reconnect the rods to the wires.  He was clearly having difficulty as he kept pulling and slamming the rods and ropes against the roof of the bus.  This caused the whole bus to shake.
It was at this point that all of us passengers realized that the rods had become stuck in a tree on the side of the street.  A small crowd of tourists had formed behind the bus to witness the driver free his vehicle from the mighty tree.  The narrow street we were on prevented other cars from passing our bus and they had to back up and find another way to their destination.
Then matters became worse when the next bus on the line pulled up behind us.  Something would have to be done soon or we were going to cause major city gridlock.  The driver from the other bus got out to try and help.  Things were beginning to look grim.
There was only one thing to do...hope the bus had some electric juice left running through its wires and GUN IT!
The driver slammed down on the accelerator propelling the bus forward.  The rods, which were still caught in the tree, ripped an entire limb down.  The limb narrowly missed falling onto one of the tourists who has stopped to observe our turmoil.
We were free.  We were safe.  We were on our way home.
The tree was not so lucky.
This is just another example of when Muni attacks!
*note - the photo is a representation of the fallen limb and not the actual limb from this story.
The Song Of The Day:  Wipe All My Tears Away by Trey Lorenz
Posted by Just Jon at 7:57 PM

Email ThisBlogThis!Share to TwitterShare to FacebookShare to Pinterest
Tag: Muni