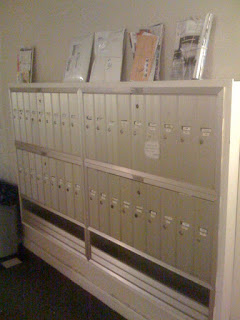 My entire life I have been obsessed with mail.
I wait with anticipation and excitement to see if the letter carrier will bring me anything.
With the invention of "e-mail" a whole new level of instant gratification through mail was achieved.
When I was older and began subscribing to magazines I had specific days of the week I could look forward to because I knew the latest issue of that magazine would be in my mail box.
All this brings me to the events of this last week.
Last Thursday I didn't receive any mail!  Nothing!  No bills, no advertisements, no magazines, nothing!
It happens.  Very rarely.  But it does happen.
Then I didn't receive any mail on Friday.  Hmmmmm.   I began to get concerned because, this meant there was a slight possibility that my Entertainment Weekly would be late.  If it didn't come on Saturday I would have to wait all the way till Tuesday because Monday was a National Holiday.  This was a big deal because I was not going to know what I should be watching on TV or what new music was being released on Tuesday.  I told myself not to panic just yet.
Saturday came and went with no mail again!
I already knew Sunday and Monday were out so I would have to wait till Tuesday.
And then on Tuesday, no mail came.
I began to rationalize that the Post Office had goofed up and put my mail on hold when it was clearly supposed to hold someone else.  Or worse, they have been putting my mail in another person's box and that person hasn't walked it over to my apartment.  Or maybe the Nation was still reeling from the historic event of inaugurating our first black president and the Post Office was taking a break.  So I decided to give the benefit of the doubt and wait for Wednesday.
Wednesday.  No mail!
That was it!  Thursday I called the Post Office.  I was pleasantly surprised to actually speak to a live person who worked in the hub that handles my mail.
I explained to the postal worker my issue.  I asked her to check and see if my mail had accidentally been put on hold.  What I really wanted to say was, "Could you please check and make sure that my Entertainment Weekly is there, I almost missed the season premiere of Lost because I did not have it."
After a few minutes the postal worker came back on the line and said, "Your whole building is on mail hold because the carrier can't get through the security gate."
Oh.
So I said, "OK, do you know if the building owner has been notified so that we can get this fixed?"
The postal worker replied, "I told you, the carrier can't get into your building."
I said, "I know, I am just trying to find out if the building owner even knows that you can't get into the building.  Does it say if they have contacted the owner?"
Once again the postal worker said, "I told you they can't get in."
Realizing I was getting no where fast I said, "Thank you, I will take care of it."
I promptly sent an email to my apartment manager asking if she was aware of the problem.
I got a lengthy response back from my manager explaining how she has been working with the Post Office for a week on this issue with little resolve.  It seems our building was caught in a quagmire of bureaucratic red tape.  The Post Office can only use their government key to enter the building so the spare key the manager left for them was not allowed to be used.  The Post Office could not disclose why their key stopped working.  The Post Office refused to use the intercom system that was reprogrammed to the apartment manager's cell phone to gain access to the building.  And on and on and on the email went.
And then at the very end of the e-mail was some good news.
The Postal Supervisor had finally revealed that the reason they couldn't get into the building was because our regular letter carrier had gone on vacation and apparently only her special government key works on our building.  She would be back on Friday and would bring the building a weeks worth of mail!
So pictured above are the stacks of mail that could not fit into our small mail boxes.
And yes, my Entertainment Weekly was there.
The Song Of The Day - Am I Here Yet? (Return To Sender) by Billie Myers
Posted by Just Jon at 11:49 AM