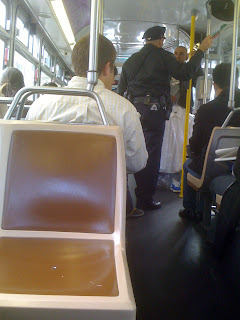 I have now lived in San Francisco for three years.  In those three years I have never seen a police officer ride a Muni Bus.  However, this past week while riding the 45 Line, on two separate occasions, a police officer has boarded the bus.
The officer, the same one on both days, walked to the back of the bus making his presence known and then exited the bus at the next stop.
I thought it was a little weird and a bit unsettling because no one really knew what was going on.  I mean the 45 Line didn't get the nickname "the Gucci Express" for nothing.  Us riders didn't know if we should be protecting our packages from a potential thief.  Clearly that was the reason the officer was on the bus, right?
After the second day of seeing the officer board the bus I decided to do some research.  Apparently I am not the only one looking into this because I found out there was a whole ABC 7 I-Team investigation about the Police Department riding city buses.
Did you know that a  "police department order is very clear -- all officers working in squad cars have to ride a Muni bus twice every shift, four times if they are on foot patrol. But passengers, city supervisors and even the police chief herself say that is often not happening."
So maybe because of the I-Team investigation the Police Department is making a greater effort to be seen on the city buses.
This is great, but might I suggest riding the 49 Line through the Mission instead of the 45 on Columbus.  The 49 is where I have seen kids tagging the bus, carving graffiti into the seats and windows, and doing drugs.
The Song Of The Day - Police Me by Tori Amos
Posted by Just Jon at 10:00 PM