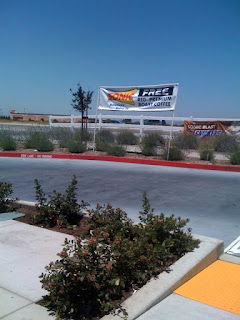 For the last 10 years or so I have seen commercials on television for the fast food restaurant Sonic.
I was perplexed by this because I had never seen a Sonic in any of the towns I lived in or traveled to.
What was upsetting about this is that they were always advertising something that looked really enticing.  I wanted that "Sonic Blast with Butterfinger!"  or the "Mini Banana Split."
After years of keeping my eyes peeled on road trips for the elusive Sonic sign I had about given up.  Then I had the brilliant idea to look on the Internet for the nearest location.
Bakersfield!
Bakersfield?
I am not driving all the way to Bakersfield for a burger and ice cream!  Even more puzzling to me was that as I looked at the map of Sonics, all the locations where in small towns off the beaten path.
At that point I gave up my Sonic dream.
Then, at Christmas time I was driving home to Southern California when I stopped off in Gilroy which is one of those "small towns" along the 101 freeway.  As I was waiting to make a left turn to get back on the freeway I noticed a sign off in the distance.  "SONIC!"
Get Out!  This was a route I traveled!  I might get my Sonic Blast after all.
This particular Sonic was not quite open yet as it was still under construction.  I would have to file this information away and use it the next time I was headed down the 101.
This past weekend as I was driving home from Southern California after the 4th of July weekend I pulled off the freeway to finally try Sonic.
I was clearly not the only person who had Sonic on their mind as there were tons of cars already in the lot.
This was not your everyday fast food restaurant.  It appeared that you could order from your car because there was a menu board at each parking space.
If you have ridden in my car, you know that I was not about to eat food in it, so I would just go inside the restaurant.  As I walked to the front of the building I quickly realized that there was no interior.  There was however the same menu board that was at each parking space in front of the building surround by several tables.  There were people standing on each side of the menu board.
As I watched the guy in front of me for several minutes I began to get annoyed.  I was thinking, "Dude, if you don't know what you are going to order, move to the back of the line and let me go."  After about five minutes he finally placed his order.
It was now my turn.  I stepped up to the board and waited for the voice to ask me what I wanted to order.
The voice never came.
Hmmmm.
I then saw that there was a red button to push.  The button lit up and said to wait to place my order.  I now felt bad because I realized the guy in front of me was not reading the menu, he was waiting for the red light.  I wanted to turn around to the people who were waiting behind me and let them know that I knew what I wanted I was just waiting for the magic voice to come out of the menu board.
Eventually the voice asked for my name and what I wanted.
"I want a Sonic Blast with Reese's Peanut Butter Cups and a cheese burger."  I paid with my credit card because I couldn't figure out if they even took cash.
I took a seat at one of the tables and tried to figure out how this operation worked.  So it looks like you can order from your car or from this board in front of the building.  Now the Sonic television commercials made more sense to me.  That is why they are always eating in their car.
When your order is ready, workers on Rollerblades come skating out of the building and head to your car or table.  If you want to pay with cash, you pay the worker when they bring your food.
As I sat at the table I listened to the customers as they approached the menu board.  They all seemed as confused as I was.  "How do I order?" "How do I pay with cash?" "What is taking so long?"
Since I was now an expert I tried to offer my help where I could.  "If you want to pay with cash, you will pay the guy when he brings your food."  "Just hit the red button and wait for the voice."  I am so helpful!
Well my food eventually arrived on a tray balanced by a guy on Rollerblades.  My mistake was not asking for a napkin, but as I looked around I saw that no one had napkins.
The good news?
My burger was soggy and the Sonic Blast with Reese's Peanut Butter Cups was just ehhhh.  Nothing spectacular.
And why is this good news?
If I had liked Sonic I would have been craving it to the point of obsession and then would have had to drive the two hours to get it again.  So I am glad I didn't really like it.
The Song Of The Day - Supersonic by J.J. Fad
Posted by Just Jon at 6:08 PM