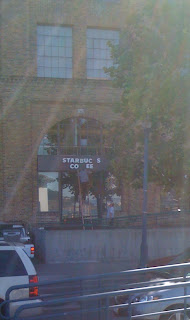 It was a sad day on Friday when the Starbucks across the street from work permanently closed. As seen in the picture above, by 4 o'clock workers had already started to remove the sign on the front of the building.
It's hard to believe that the amount of coffee our office buys from this location was not enough to make it profitable.
We found out months ago that our Starbucks was slated for closure and so began the journey through Kubler-Ross' Seven Stages of Grief and Dying.
Stage One - Shock/Disbelief
Stage Two - Denial
Stage Three - Anger
Stage Four - Bargaining
Stage Five - Guilt
Stage Six - Depression
Stage Seven - Acceptance And Hope
Goodbye Starbucks, I have many fond memories on your couches and in your courtyard.
The Song Of The Day - Time To Say Goodbye by Andrea Bocelli and Sarah Brightman
Posted by Just Jon at 9:18 AM