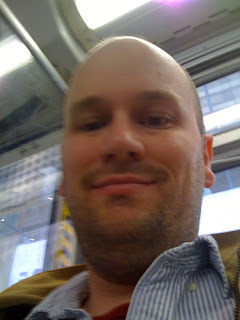 What better way to start back up the blog than with a story about the 30x.
Just to refresh your memory, the 30x is the "express" bus I try to take to and from work each day.  This is the bus that is usually full in the morning and often times two or three buses will pass me by before one stops and allows me to cram myself into the back stairwell or press myself up against the front windshield.
Good times!
Well, each summer there seems to be a shake up of the regular drivers.  Maybe our regular drivers are on vacation?  Who knows.
Over the last several weeks our "temp" drivers seem to be very confused by the 30x's route.
The first incident happened about a month ago when the driver drove right past the last stop where most of us wanted to get off in the financial district.  The look of panic on the Marina Girls' faces was priceless.  One even managed to stop texting long enough to shout out, "Ummm, like you totally went past our stop!"
The driver, in probably not the safest move, turned around to see what she was yelling about.
"Ummm, you were like supposed to let us off like a block ago."
The driver immediately apologized and stopped the bus to let us off.
The following week a different "temp" driver failed to make the final turn in the financial district to approach the last three stops.  Realizing his mistake he slammed on the brakes in the middle of the intersection and took a dramatic pause while he thought about what he should do next.  When he slammed on the brakes, several Marina Girls almost spilled their Starbucks coffee and or dropped their cell phones.  I even slid forward so hard in my seat I was sure I was going to have a bruise on my leg. Hence the grimace face above.
The driver finally decided to move the bus out of the middle of the intersection and pull over to the nearest curb.  Every person got off the bus with no questions or comments to the driver.  I was so thankful to be alive I didn't even care that I had to walk an extra three blocks to work.
Then just this week it happened again.  The "temp" driver stopped the bus three stops before the end of the route.  He turned around and looked at all of us who had refused to exit the vehicle and said, "Last stop!"
To which we assertive Marina folk replied, "No! Keep going!"
Again the driver said, "Last stop!"
One Marina Girl said, "Spear.  Keep going to Spear Street."
The driver turned around and started the bus up again.  As we approached Spear Street the same Marina Girl said, "Right here, this is where you stop."
Thank you Marina Girl for saving the day!
The Song Of The Day - Don't Stop Movin' by S Club 7
Posted by Just Jon at 4:39 PM