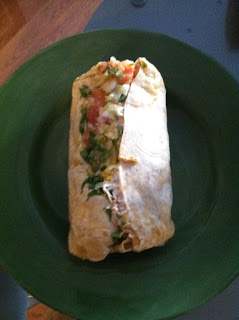 I recently tried one of the taquerias in my neighborhood called Las Palmas Super Burrito & Seafood.

After entering the establishment the first thing you will notice is the counter to ceiling glass wall that separates/protects the workers from the customers.

I read the menu through the glass and decided to order a chicken burrito.

The employee asked if I wanted my burrito cut in half?

Cut in half?  Who cuts their burritos in half?

When my burrito was ready the employee called my number through a small window.

She handed me a bag that weighed more than a brick.   When I got home I took the burrito out of the foil and placed it on a plate.   This was some serious pollo!   I am not kidding when I say this was the biggest burrito I have ever seen.

Now I understood why the employee asked if I wanted the burrito cut in half.

Every bite was filled with mouth watering chicken.  There was no "filler."

The next day I went to the bank and while waiting in line the two customers in front of me were discussing the giant burritos at a local restaurant.

"I eat for two days on one of their burritos, and they don't skimp on the meat," one woman said.

"Are you talking about Las Palmas?" I asked.

The next time I went to Las Palmas I thought I would try the quesadilla in hopes that it might be smaller than the burrito.

No such luck.  It was probably bigger than the burrito.

I went back to Las Palmas the other day and I found if funny that two of the customers were discussing how big the burritos are.  They were basically complaining about how generous the restaurant is with the meat.

As they were having this discussion another gentleman was finishing up a taco.

He interrupted their conversation to say, "Even this taco is too big.  I can't finish it, so I am going to give the rest of it to the homeless man out front."

Now that is a big taco!