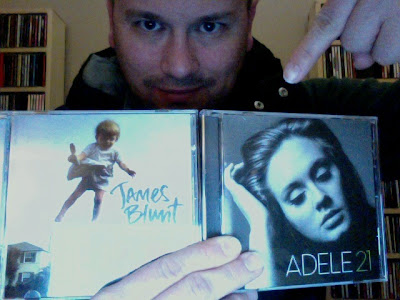 I hope that after three years of writing this blog; Loyal Readers have picked up on the thread that ties it all together - MUSIC.

I have been obsessed with music since the first time I played my mothers 45 records on my childhood record player.  (I still have her records and the record player.)

Back then it was all about Diana Ross and The Supremes' You Can't Hurry Love and Del Shannon's Runaway.  The later of which I auditioned with for the school Christmas play in seventh grade and got the lead part.  (My mother always thought it was funny that I belted out Runaway to a nun.)

The first "pop/rock" record I ever purchased was The Eurythmics Sweet Dreams (Are Made Of This).  A totally inappropriate song for an eight year old to purchase for them self.  (Don't believe me, just listen to the woman wail throughout the song about "some of them like to be abused.")  I just thought it had a good hook and I didn't even know what a hook was back then.

My music collection is quite extensive and at one point it was organized in purchase date order.  That was something that only I understood, so eventually I had to give in and sort it alphabetically.

So the reason for this post is that late 2010 and 2011 are shaping up to be a pretty stellar years for music. I determine a good year for music if I am compelled to buy an artists full length CD and not just download their current single off iTunes.

Two recent purchases that I highly recommend you go out and pick up for your own collection are James Blunt's Some Kind Of Trouble and Adele's 21.

Both of these CD's I can listen to beginning to end without skipping any tracks.

James is back in strong form after a so so sophomore effort with All The Lost Souls.  All The Lost Souls was the follow up to his amazing debut Back To Bedlam.  I have seen James perform twice in concert and his shows are quite energetic and fun considering he is a known for slow acoustic guitar driven tracks.

Stand out songs on  Some Kind Of Trouble are:

Adele's 21 is the real deal.  Girlfriend can SING.  This collection of throaty torch songs about heartbreak and loss is perfection.  The lead single Rolling In The Deep has already been featured in television commercials.

I don't have Adele's debut CD 18 but I did download the bootleg remix album by Mick Boogie called 1988 where all the tracks on 18 are mashed up with songs from the year 1988.  Stellar!

Every song on 21 is a stand out; but I will share my favorites:

The Song Of The Day - Lovesong by Adele
Posted by Just Jon at 11:43 PM