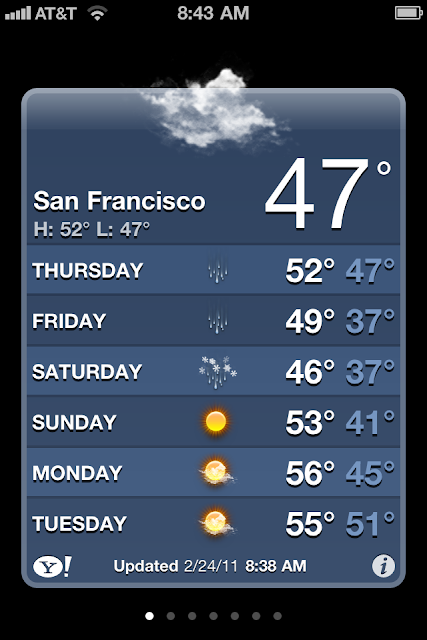 On Tuesday Just Dad left a message on my cell phone alerting me that all the TV weather people in LA were in a flurry because they claimed it was going to snow in San Francisco.

As I stood on the Muni platform waiting for the train that night listening to this message I looked at the clear sky and thought to myself, "It's not even that cold in The City right now."

Before calling Just Dad back I launched the Weather App on my phone.   Just as I suspected, sunny and 55 on Wednesday with a chance of rain by Friday.

I called Dad back and said I didn't think snow was in the near future for San Fran.

The next morning, as if we Nor Cal peeps had finally heard the news of the impending snow storm, there were discussions on the radio, the Internet, and television about the situation.

I was still skeptical.  But just in case I broke out the full length Jos. A Bank Wool Coat.

"It's not cold enough," I kept saying to myself.

By the time I got to work I felt like a total putz.  The wool coat was way too heavy for the actual weather of the day.  It was so out of place that several co-workers even questioned my outfit decision.

"Dad called and told me it was going to snow," was my answer to all my co-workers.

Thursday morning I got up and looked out the window.  NO SNOW!

Then I picked up the iPhone and launched the Weather App again.  (The truth of the matter is, the Apple Weather App is pretty darn accurate for this City of micro-climates.)

This shiz is fo real ya' all!

Batten down the hatches and stock up on the kerosene by Saturday we're going sledding down California Street!

This is San Francisco however, so by tomorrow it might say snow again.   Cross your fingers!

The Song Of The Day - Walking In Snow by Jordin Sparks
Posted by Just Jon at 10:47 PM