And this is the blog where JonPaul met RuPaul.
Earlier in the week I saw the above Tweet from RuPaul that said he was coming to San Francisco for a CD Signing at Amoeba Music.
It only took a second for me to think about this.
Meet RuPaul and go to a record store?   Count me in! 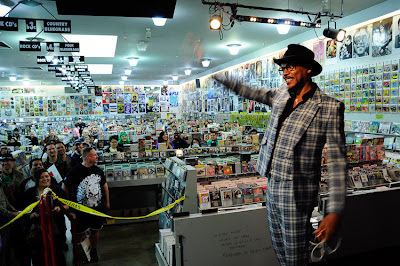 The CD signing was to start at 2pm and I opted to take public transit across the City.   This made it a long trip and the large cup of coffee I drank was probably not the wisest decision.
When I got to the Haight I immediately went in search of a restroom.  I checked inside the Whole Foods across the street from Amoeba Music but was unsuccessful.   As I was waiting to cross the street to go to the McDonald's I realized that RuPaul was standing next to me about to cross the street himself.  (This is not the first time I have run into a celebrity while trying to find a restroom.  Loyal Reader Erin may recall the time I about took out Jennifer Garner at the Paley Center For Media in Los Angeles.  When you got to go you got to go.)
After taking care of "business" I headed over to the record store where I purchased RuPaul's latest CD Glamazon and then proceeded directly to the end of the line of people waiting to meet Ru.
I was approximately number 120 out of 150 people waiting.
RuPaul promptly came out on the mini stage and welcomed everyone to the event and then the autograph signing began.
While waiting in the line; an employee from Amoeba Music came up to each person and gave them a RuPaul's Drag U Mirror Compact.  This was quite helpful for several of the males who needed to repeatedly "beat" their face.
The employee also asked each person how to spell their name and then printed it on a Post-it.  She said that the Artist wanted to make sure that he spelled every one's name correctly. 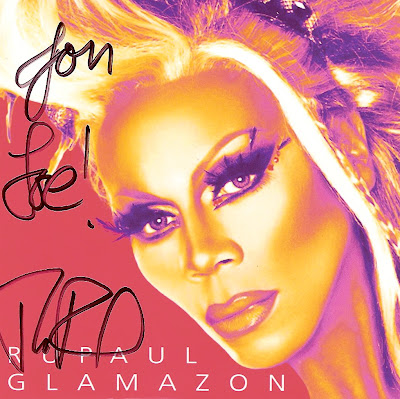 Here are the three things that I found incredible about the event:

1.  RuPaul showed up on time!
2.  Ru spent between three and five minutes talking to each person individually!
3.  The line, though rather slow (it took almost three hours) was kind of fun and no one complained!

On more than one occasion Ru stopped signing autographs to acknowledge everyone in line.

One time he made a joke which was followed by his infectious laugh saying, "Thank you all for waiting!  I swear I will get to you all and I'm going to tongue kiss everyone!"   That made the crowd cheer. 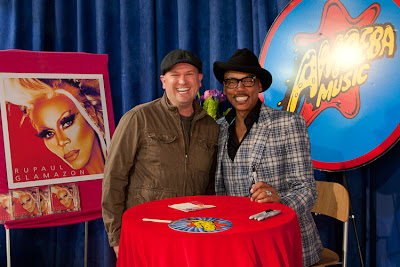 When it was finally my turn I tried to have a little fun.
I said to Ru as I walked up, "Gee, after standing in this long line I kind of feel like we are on a speed date."
Ru went along with the joke and asked if I had ever done speed dating and then said, "Well what do you like to do?"
Then when it was time for our picture I tried to make another joke in reference to his very first record.  I said, "Look, I think we are about to be spotted by an Ebony Fashion Fair talent scout and our modeling career is about to take off."
I am not sure that joke went over quite as well as the speed dating.
After our picture it was time for a hug goodbye and the next fan to have their moment with RuPaul.
RuPaul was the model for how to be a gracious celebrity while showing appreciation for fans!
The Song Of The Day - Glamazon by RuPaul
*RuPaul photos courtesy of Amoeba Music