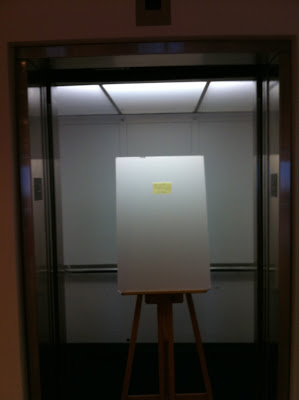 I was running "last minute" (not late) to a meeting at work on another floor earlier this week.

When I got to the elevator, the doors opened up and I saw a co-worker who was going to the same meeting I was already standing inside.

That was when my ears disconnected from my brain and my hand functions.

You see, as I stepped into the elevator and hit the button for the first floor I neglected to process the information that my co-worker was saying to me.

"I've been trapped in the elevator for five minutes and it hasn't gone anywhere.  When you hit the button the doors finally opened," she said.

I also neglected to take in her facial expression of "I JUST TOLD YOU I HAVE BEEN TRAPPED IN THE ELEVATOR DUMB ASS!  NOW YOU JUST CAUSED THE DOORS TO CLOSE AGAIN AND BOTH OF US ARE TRAPPED!"

I tried to use my employee badge to trigger the elevator to take us to another floor but that did not work.

I leaned down and hit the call button key.

An automated voice came over the speaker to tell me that I was in elevator #3 at _____ address.

Um yeah...I am well aware of where I am thank you very much.

Then a woman's voice came over the speaker and she asked where I was.

I told her my co-worker and I were trapped in elevator #3.

Her next question I thought was rather stupid.

"Are you an employee?"

But what should that have mattered.  Would this be more or less of a priority if I say I am not an employee?

The woman then said she would alert maintenance to the situation.

My co-worker was periodically hitting the buttons and eventually the doors sprung open.

We both quickly exited the elevator.

Knowing that we were late for our meeting we were about to hit the call button for elevator 2 when I said I thought we should put a sign in front of elevator 3 to make sure no one else got trapped.

My co-worker went and got a Post-it note as I moved an artist easel that was in the lobby to block the elevator door.

Feeling like we had done the right thing we continued on our way to the meeting.

When we reached to first floor we stopped at the security desk to let them know we had been trapped and that the elevator was broken.

The security guard said, "I know.  It is all taken care of now.  The elevator is locked on the fourth floor."

"Well, we just want to make sure no one else gets in it," we said.

The guard then gestured at the security monitor and said, "Don't worry, we put a sign in front of the door."

My co-worker and I looked at each other and then back at the security guard and said, "We put the sign in front of the elevator.  No one came and saved us."

Suddenly I no longer cared about the harrowing five minutes I was trapped in the elevator; I just wanted proper credit for saving everyone else on the fourth floor from getting into elevator 3.

My priorities are totally clear.

The Song Of The Day - Stuck In The Middle With You by Louise
Posted by Just Jon at 12:35 AM