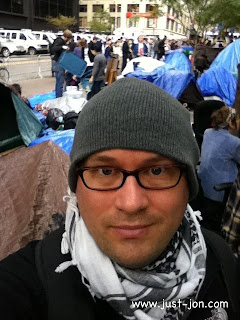 Today I am blogging to you live from the Starbucks on West 54th Street and Broadway where I have to say is the happiest Starbucks staff I have ever heard.   They are all singing in unison to John Legend.  It's quite lovely.

But I digress; back to the Protest.  A little while back I told you about San Francisco's efforts to join the Occupy Movement.  Well, needless to say I was not impressed with the SF version of the protest which appeared to be little more than the shelterless residents of the Haight moving downtown. 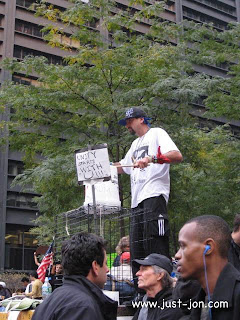 So being in New York meant I could check out the O G Original Occupy Wall Street movement.

Located across the street from the 9/11 Memorial in Zuccotti Park I found the future of America?

God I hope not.

As they pounded on makeshift drums, burned sage and smoked only "medicinal" marijuana;  (wink wink) 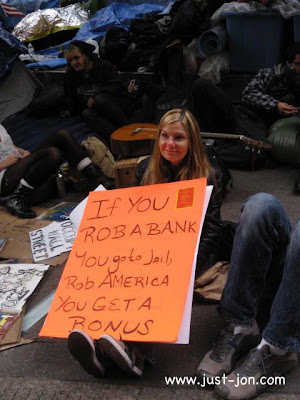 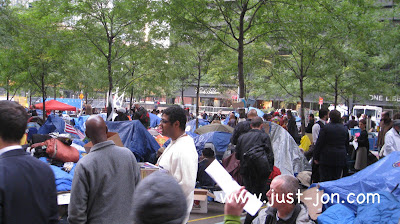 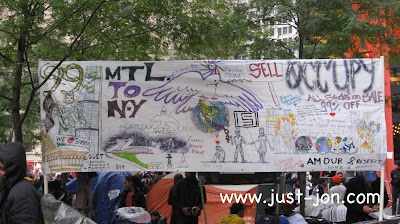 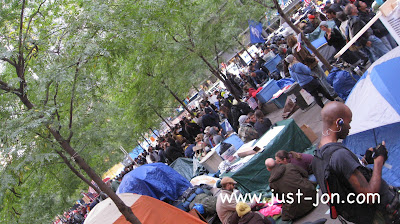 they used scraps of cardboard, paper and Sharpies to get their message across.  Allegedly. 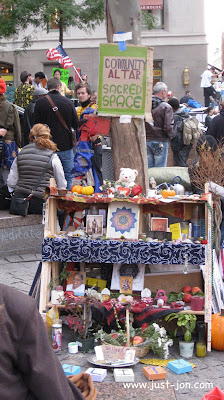 As I wandered through the encampment I observed large plastic bins with Duct Tape on the side marked "Library" or "Food."  There was even a "Sacred Space" community altar.

This was all fine, but I as I looked around the majority of the protesters did not look like displaced middle class who had lost their jobs in the economic downturn.  In fact I would venture to say that the majority of the protesters did not have a long term jobs or permanent residences before the economy tanked.  That is just my observational hypothesis.

As winter approaches I will be interested to see how long the Occupy Movement wants to stake claim to Zuccotti Park.