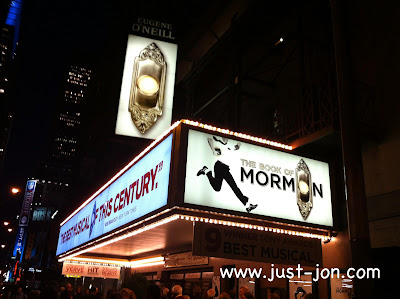 The hottest show on Broadway right now is The Book Of Mormon which was written by the co-creators of South Park Trey Parker and Matt Stone with Robert Lopez.

How hot is this show?

Well, for starters it won nine Tony Awards and is sold out till February 2012!

If you are willing to pay the price, authorized second hand tickets sellers like StubHub offer tickets ranging from $150 to $700.

The demand is so high for tickets that they even sell "Standing Room Aisle" seats.

I was fortunate enough to get a ticket to this show while in New York.

This show is wickedly funny, inappropriate at times, cringe worthy and offensive.  In other words; exactly what I would hope for in a musical from the creators of South Park.  In addition to all those words, I would also say that this show has heart.

The premise of the show is two young Mormon Boys who are paired together and sent on their Mission to Africa.  The boys could not be more opposite in personality and the show deals with how they cope with the harsh reality of the real world and the challenges it puts on their faith.

I am not Mormon and I do not claim to know a lot about the Mormon religion, so I could understand how people of that faith might find this musical beyond offensive.

Out of the packed theatre I only heard one elderly woman complain on the way out that she did not like the show because she was offended.  Everyone else I heard thought it was brilliant.

A very funny moment was after the show had come to a close.  The actors stayed on stage to speak to the audience about a fundraiser they were participating in.   They asked patrons to make donations on the way out of the theatre.  They also offered signed cast posters of the show for $250.  When the lead in the show mentioned the price there was a mild rumble from the audience which could have been interpreted as disapproval for the high price for the poster.

Not missing a beat the lead said, "Don't you awwwwwe me!   We know some of you paid $750 just to get in tonight.  What's another $250 to you, if you can throw that kind of money around.  Why not make it an even grand for your night out!"

He made a lot of sense and once again the crowd laughed and applauded his logic.

If you like South Park - go see this musical!

The Song Of The Day - Spooky Mormon Hell Dream