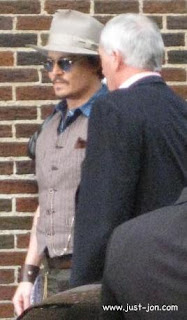 So here is what I know to be true.   If you see a large group of people gathered in one spot all looking in the same direction; you should either join them or RUN!

I tend to be a joiner.

Yesterday I thought I was joining a crowd waiting outside the Late Show With David Letterman's stage door to see Justin Timberlake emerge.

Alas, I found out that Dave had tapped two shows on Wednesday and I had missed Justin Timberlake by about three hours.

So if the crowd is not waiting for Justin Timberlake, then why are all these people and paparazzi camped out on the sidewalk?

I asked the lady next to me who said, "Johnny Depp is coming to tape the second show!"

OOOOOOH.    That IS worth waiting around for.

So I perched myself across the street leaning against a garbage bin for 45 minutes (yes, I said a garbage bin) and waited for Edward Scissorhands.

Then he arrived.  Posed for the paparazzi.  Generously turned to face his fans (including a topless lady) and waved.

Hello, to you as well Johnny!

The Song Of The Day - Johnny by Melanie Fiona
Posted by Just Jon at 8:46 AM